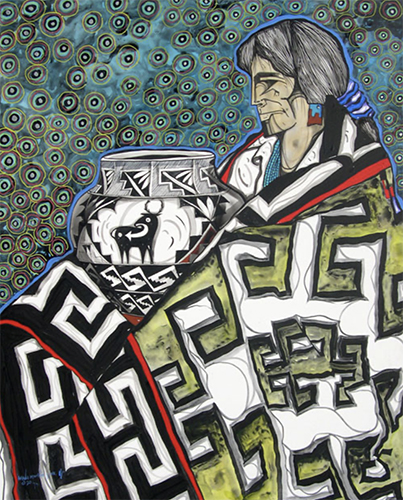 Amado Peña is recognized as an Artisan of the Pascua Yaqui Tribe of Arizona. This is a particularly high honor and one that he cherishes. He is dedicated to furthering the public’s knowledge and interest in the Tribe, its art, its history, and its culture.

His art celebrates the strength of a people who meet the harsh realities of life in an uncompromising land and his work is a tribute to the Native Americans who survive by living in harmony with an adversarial, untamed environment. His artwork is inspired by places such as Canyon de Chelly, Spider Rock, Monument Valley, Enchanted Mesa, Acoma, and Black Mesa. These sites are part of an enduring landscape that speaks of the ancient heritage of a region that is now known as Arizona and New Mexico. Amado’s artwork is defined by its bold color and form and dynamic composition. 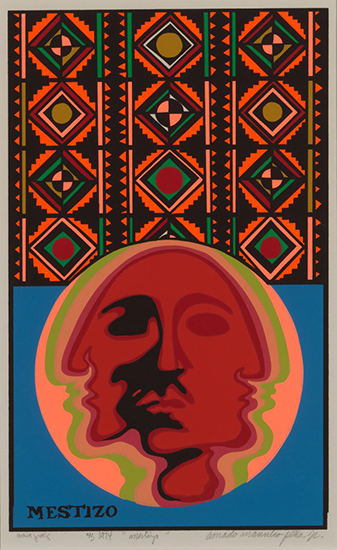 Q: In the late ‘60s you were attending graduate school and the U.S. was in the middle of what some people call the Chicano Revolution. How did this affect your work then and now?

As art students, we were looking for reasons to participate. We were very much involved with trying to portray imagery that had to do with what was currently going on in the United States, which was pretty much brought out by the farm workers strike in California, and it kind of trickled down into Texas. The imagery was being used from the Mayans, Aztecs, etc and my whole philosophy as an artist is that of a storyteller. To document and record; to portray imagery that was relevant to a specific group of people. I realized at that point in my life that these images were important. 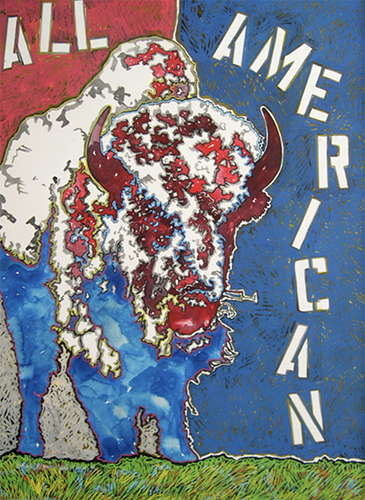 Q: You were one of the first screen printers in Texas. Many artists came of age during the civil rights, labor, anti-war, feminist, and LGBTQ+ movements of the ‘60s. How did you use this medium as a way to express yourself?

In high school I was learning how to silk screen. Once in college, I continued with the medium and used it to document the Chicano experience through art. Being involved in the Chicano Revolution, I was able to use my art as my voice. We are influenced by everything around us. We’re visual, we get messages and interpret them into visual imagery. As a visual artist, I feel it is important to document what is relevant to me and what I know and share it with the public. There are all kinds of art movements, this group of artists were making statements with one specific purpose and that was to have an impact and acceptance as an art form. 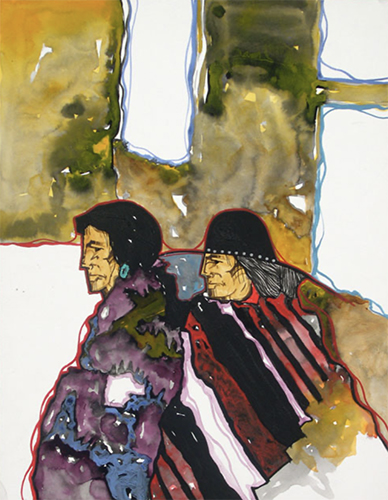 Q: What stories do you hope the men and women in your work tell the viewers?

If anyone looking at my work feels anything at all, that is what I was trying to convey. They don’t need to feel what I was feeling or what others may feel. Positive, negative, excited, or confused – if they look at it and feel something, then I have achieved my goal. Your experience with my work, that is where the value is. 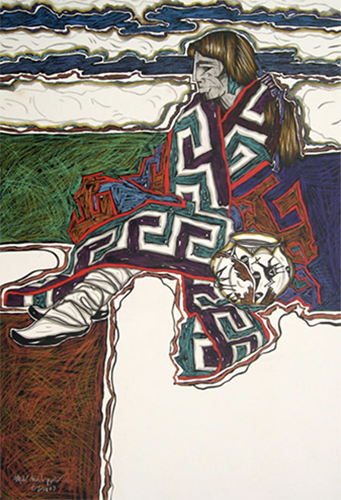 Q: How did growing up on a ranch affect your early work?

How anyone grows up will affect their lives. Growing up on a ranch affects how I feel about people and the space I am in. A lot of my early subject matter had a lot to do with ranch life. A lot of what I do comes from life itself. I was really fortunate in the way that I was raised to appreciate life. I am like a sponge, observing everything around me. Whether it is visual or, or I hear it, or I smell it. My art is only a tool. When I start drawing, all of those things come out and I think of it as a result of how I was brought up. 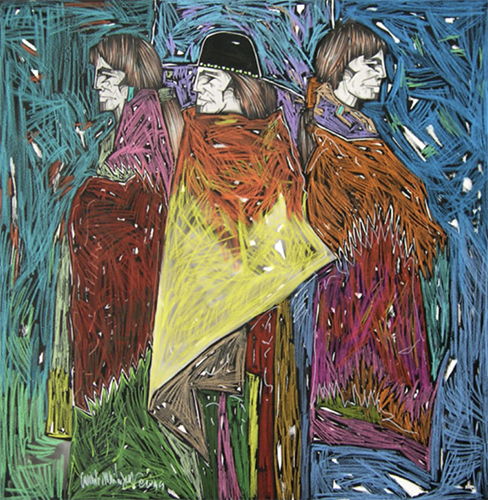 Q: You established the Art has Heart Foundation in 1994 which has given out over 550 scholarships for higher education college studies. It also promotes education and access to it through the work of artists and the public who support them. Tell us how others can get involved or donate to this incredible foundation?

I was very lucky growing up with a father that never said no. He always helped anyone who needed it and taught us to do the same. Being in education as long as I had, I saw a lot of students that needed help. The foundation was started to help those students get support. We partner with Austin Community College and have a big project, all on Ampersand panels, that is pending due to the pandemic.

For more information and to donate, visit: arthasheart.org 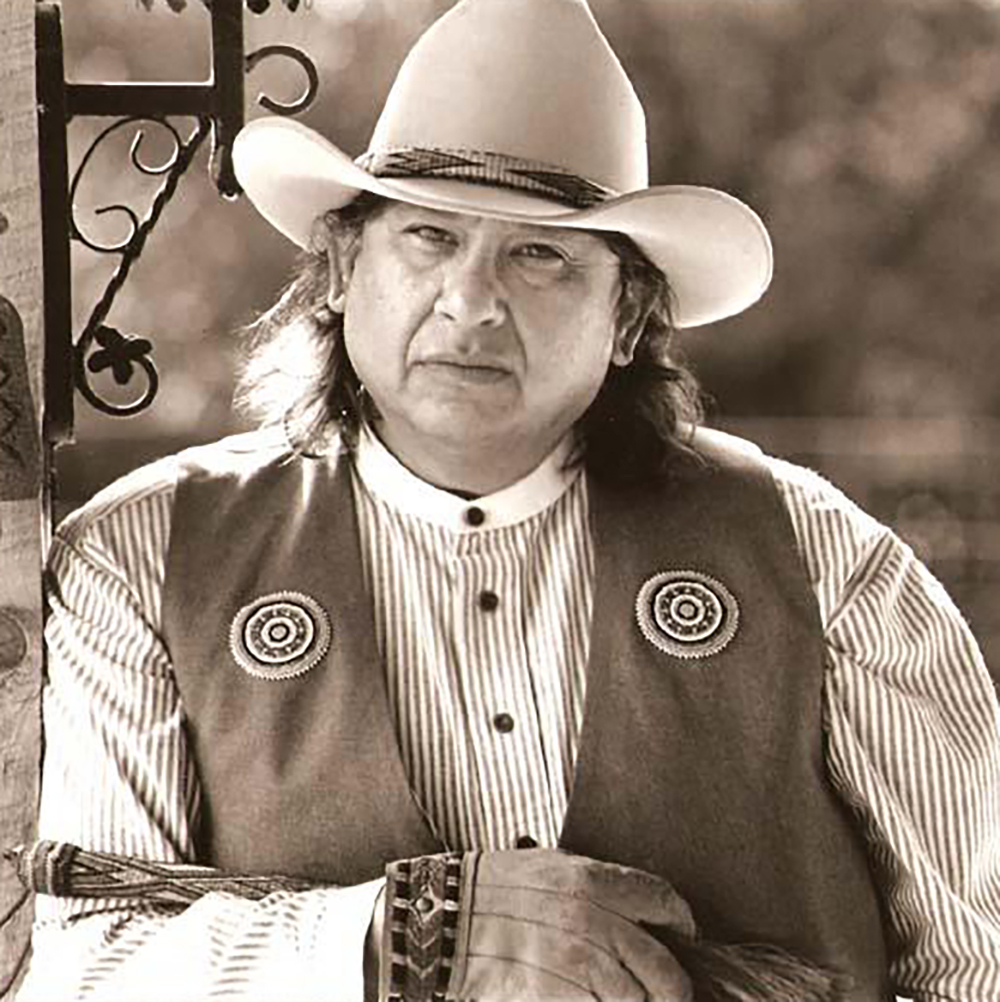 Amado Maurilio Peña, Jr. was born in Laredo, Texas in 1943.  He studied art and education at Texas A&I (now Texas A&M Kingsville), where he received his bachelor’s and master’s degrees.

He was a teacher in his hometown of Laredo as well as in Crystal City and Austin, Texas. He continues to teach as part of the Studio Art League program at Alexander High School in Laredo and is also an adjunct professor in the College of Education at the University of Texas. He has been a presenter at many national education conferences.

Of course, Amado’s first love is art, and he has been a successful professional artist for more than 30 years. To see more of Amado's work, visit his website and Facebook.