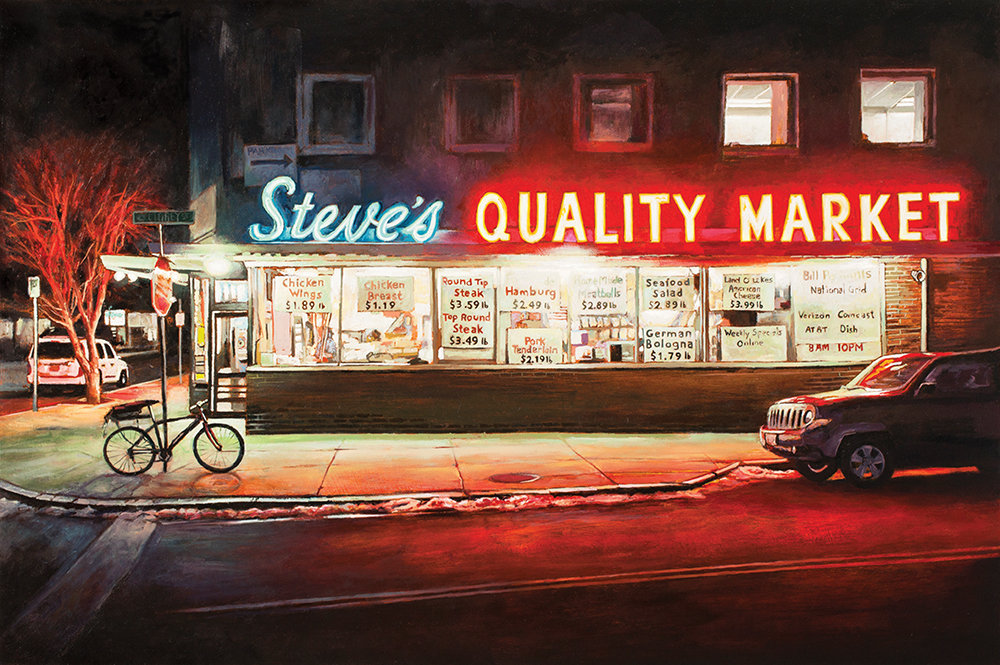 We caught up with Beverly, MA artist Andrew Houle, who uses oil on Ampersand Claybord, for a Q&A session. Houle, recognizing influences from Hopper and Rockwell, has worked towards creating a personal narrative through his paintings connecting the viewer to his or her community. His work can be found all over the world in private collections and represented by galleries throughout New England. 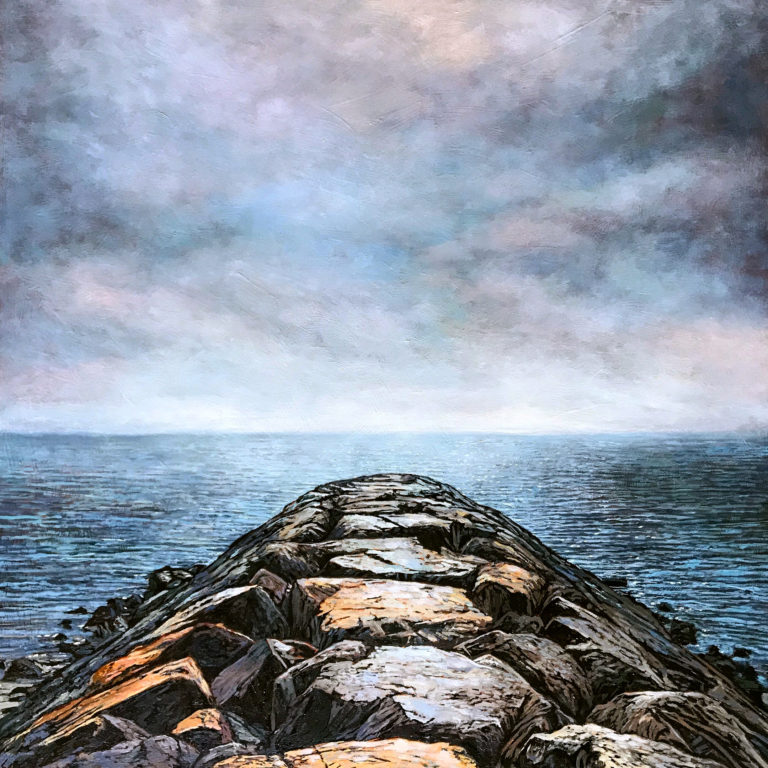 Q: You use Claybord for most of your artwork. When did you first discover Claybord?

A: Oh man… so I can honestly say, I’ve been using Claybord products for so long I don’t even remember when I started. I would guess at some point while attending Montserrat College of Art, which was the late 90s. (Wait... did I just reveal my age?!)

I discovered the surfaces available at my local art store, picked one up, and that moment had a major impact on my work moving forward. I had been struggling to implement different mixed media techniques early in my career; by collaging and painting over paper, and Claybord unlocked the code for me. I had found essentially what I needed moving forward as an artist. 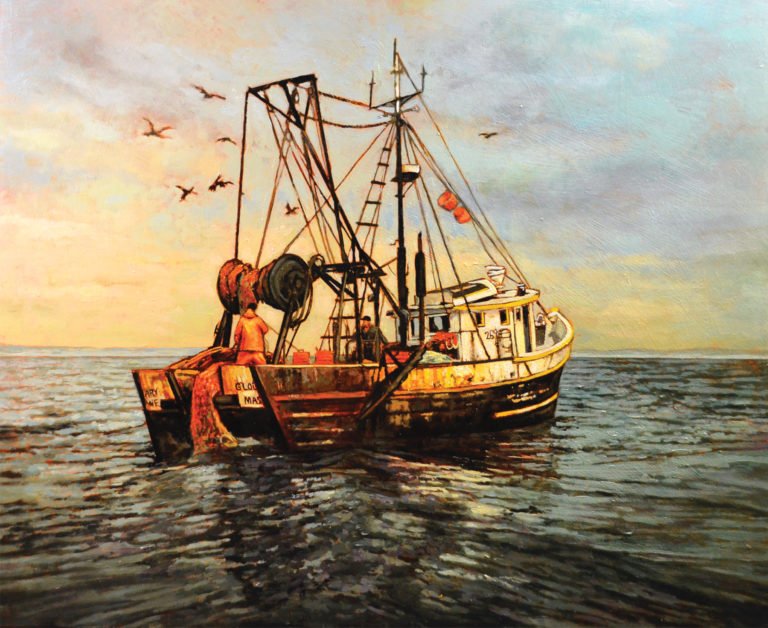 Q: What is your favorite technique to use on Claybord? Or what do you love about it most?

A: So, something Claybord uniquely offers me is the ability to really draw... just absolutely work the surface in graphite. My work starts as a thorough underdrawing, which I then seal before painting directly over.

So, Claybord really allows me to just draw and draw and draw without any concern that I’ll somehow jeopardize the integrity of the surface.

It’s tough as nails yet smooth enough to allow lots of smudging, pushing and pulling with graphite. 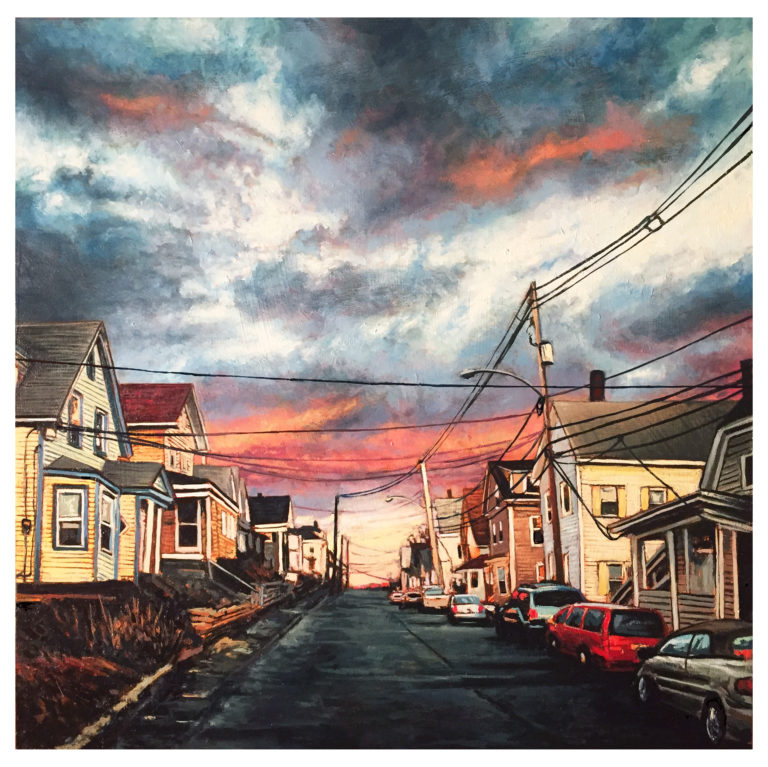 Q: Does your love of comic books influence your style of painting?

A: Big time. Something I fought for a long time was that I had seemingly two separate bodies of work.

A comic book-based / pop culture side to my work. Childhood for me was lots of comic books, Saturday morning cartoons and action figures. A love of comics created an early fascination with drawing and directly lead me to applying to art school.

And separately, where I predominantly find my visual voice today is in landscape painting. My landscape work has been classified as “American Realism” which I’ve found fits well to those that have never seen it.

It’s strange at times straddling both genres of work. But personally, it hits a nice balance of playful work... and work that can get heavy with its tone.

Q: What is your dream project?

A: Dream Project? Anything with the Boston Celtics or Marvel Comics or Newport Folk Fest. Maybe we can find a way to merge all of those? Sounds doable.

Ultimate bucket list for me though, on a professional and personal worlds colliding, would be to somehow work with any of those 3 organizations. That would be the mountain top for me. 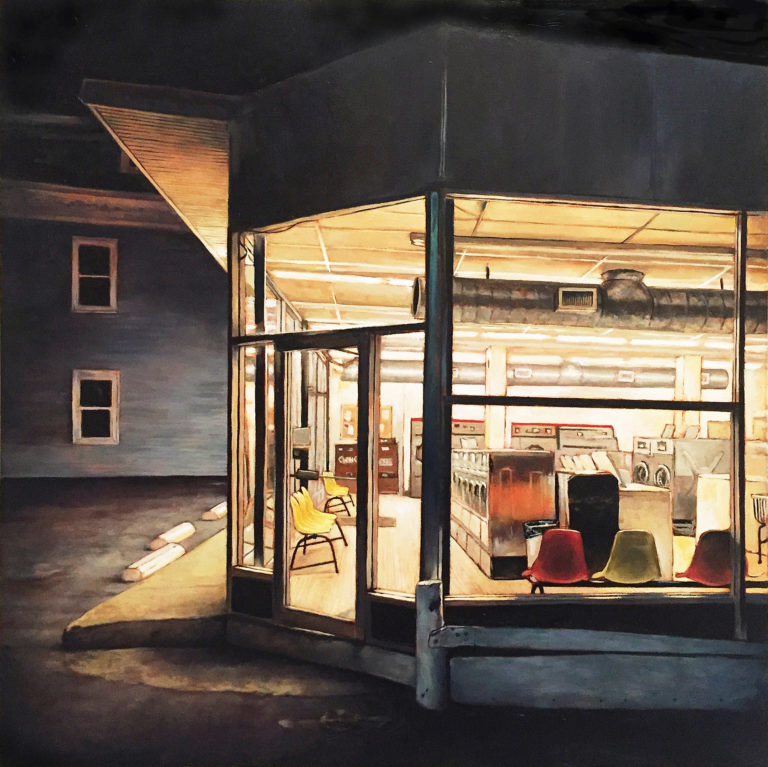 Q: Who are your biggest influences?

A: On one side of the fence... some obvious influences for me are Edward Hopper and Norman Rockwell. But a big initial influence on me was George Seurat, not so much his pointillism, but his charcoal drawings had a major influence on me very early as an artist.

Then later J.M.W. Turner. His sprawling seascapes... I’ve been lucky to see a bunch of them in person.

In terms of fine art, those 4 artists are my Mt. Rushmore.

On the other side of things, and I’m going to go down a nerd wormhole here... fair warning. On the comic book end, I had a wider array of influences. There was just more access for me to these artists as new comics came out every week and back issues and collected graphic novels were sitting on the shelves.

Dave McKean was big for me. Still is. Arkham Asylum floored me. I constantly go back to that book for inspiration. His ability to work in any media challenged me to keep searching for how I would ultimately work. Kent Williams’ work on Havok / Wolverine, Tell Me Dark & Blood made me rethink what a “comic book” could be. Bill Sienkiewicz's work on Elektra.

Later... Ashley Wood on Popbot, Spawn, and anything else he touches. Farel Dalrymple, Sam Keith, Jon J Muth, on and on. I discovered late that painters could also work in comics and in response I feverishly and overzealously tried to be “that”.

And in the most accessible terms of all, I had great instruction at Montserrat College of Art. Notably from Kathleen Speranza, George Gabin, Fred Lynch, Elissa Della-Piana, and Haig Demarjian. They were shapers. Not just teachers. They all made lasting marks on how I would find my visual voice. 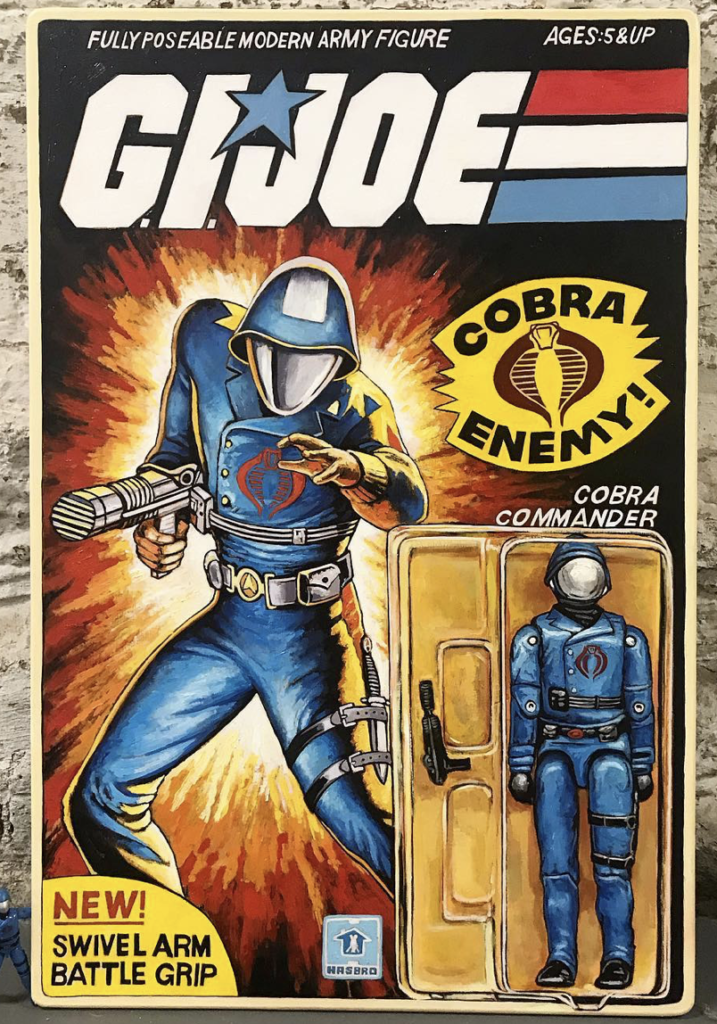 Q: What memorable responses have you had to your work?

A: A couple stand out. A year or so back I was commissioned by John Cena. My work ended up in front of him via a good friend and shortly after he hired me to create a giant GI Joe / Cobra Commander action figure painting. Emulating the sealed figure on its blister card. There was quite a response to finally sharing that. Wild stuff; lots of fun.

And also, I should mention doing the label art for Channel Marker Brewing. They are a Beverly, MA-based craft brewery that I have been working with for about a year designing all the art for the beer labels. We match up well aesthetically as they are a New England / maritime-themed brewery, so my work lends itself well. Each painting is geared towards the specific brew that’s being canned next.

The support I’ve seen from putting high quality work out there on beer labels has been pretty overwhelmingly. It’s a whole alternate art universe of ravenous fans that are deeply appreciative when you elevate something they care deeply about. So that’s been very fun and eye-opening. We did 5 labels together last year so look for a bunch more this year, those guys are really doing something special.

A: Marvel. Alllllllllllllll day. The characters and storytelling on the Marvel side are too vast and influential for me to list... but let me try anyway!

The first comic book I bought with my allowance money was Silver Surfer #25 illustrated by Ron Lim. A double-sized issue filled with cosmic space battles. The next week I bought as many Uncanny X-Men as I could afford. Marc Silvestri was drawing Uncanny at the time... a run that would define many of the popular characters. The next week it was The Amazing Spiderman.

I will say though, Batman holds a special place for me, and specifically Adam West as Batman.

But unfortunately, he alone can’t tip the scales.

So yeah, “Make Mine Marvel.” 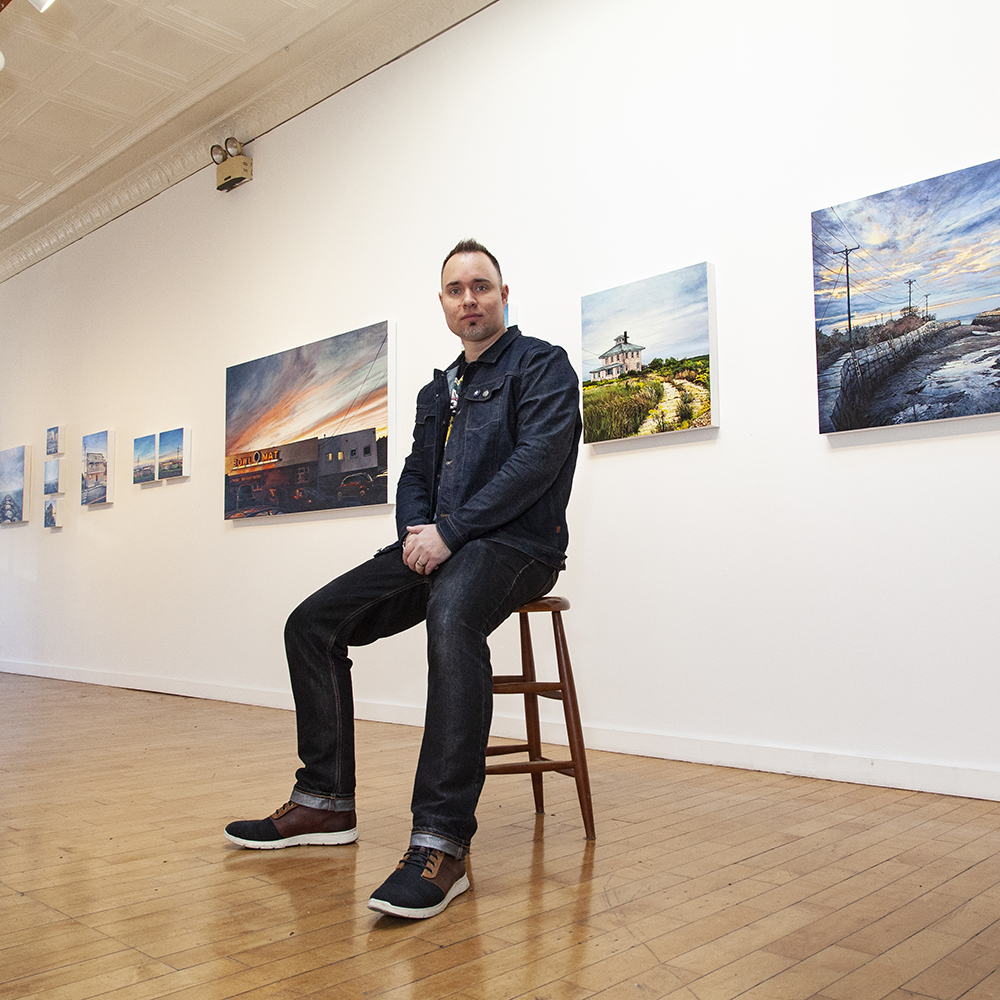 Andrew Houle has lived in Beverly, MA since graduating from Montserrat College of Art in the year 2000. While studying primarily illustration, a love for oil painting co-existed throughout his formative years, leading to a split body of professional work exploring influences from comic book / pop culture to landscape painting. Houle shifted focus in early 2005 to what has been described as American Realism; capturing the surroundings north of Boston in an eclectic body of work highlighting blue-collar landmarks and iconic Cape Ann light. Houle currently splits his time painting in his studio space at Porter Mills in an effort to be somewhat prepared for his next exhibition, working on label art for Channel Marker Brewing, and taking on the occasional private commission. He shares a home with his wife Melissa, his daughter "Super" Elaina, son Ethan, and his comic book collection. To see more of Andrew's work, visit his website or Instagram. 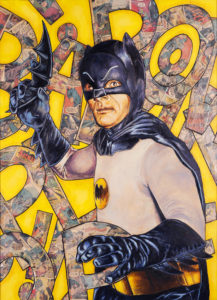 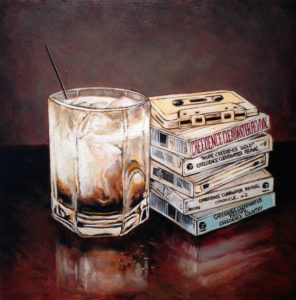 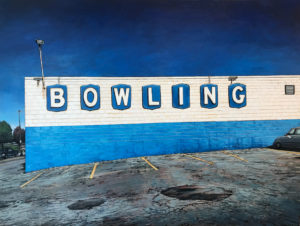