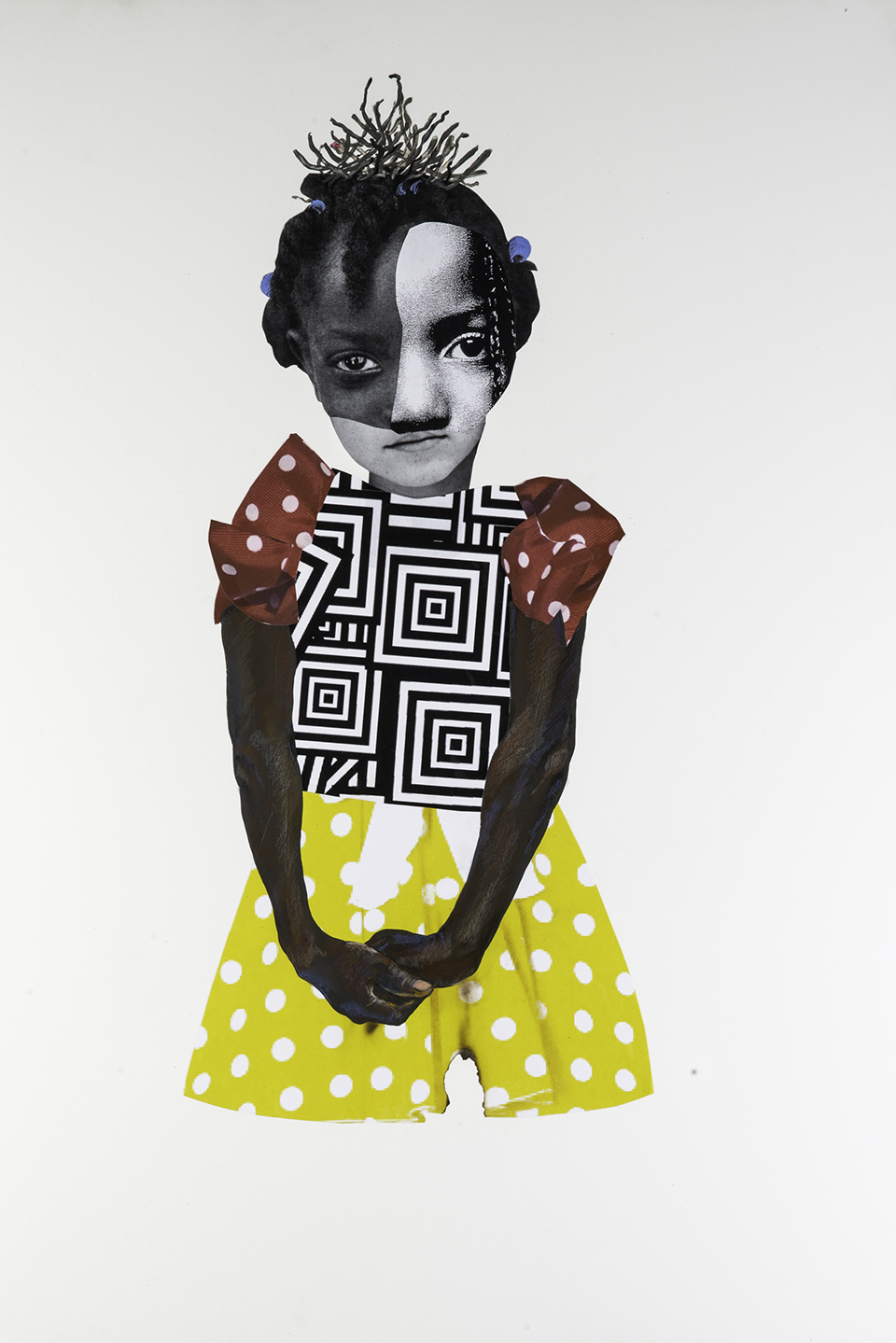 Deborah Roberts is a mixed media artist whose work challenges the notion of ideal beauty.

Q: You’ve used a lot of different media and techniques over the years. What led to combining these approaches and materials with collage?

It started in my graduate years when I went back to school in 2008, and I was trying to figure out a way to get my point across. I had been doing a lot of painting, and one day it just worked, adding a collage to the face, and I said, you know, this might be a better way to talk about the multiplicity of Blackness. So, I started doing more research and it all began to come together. 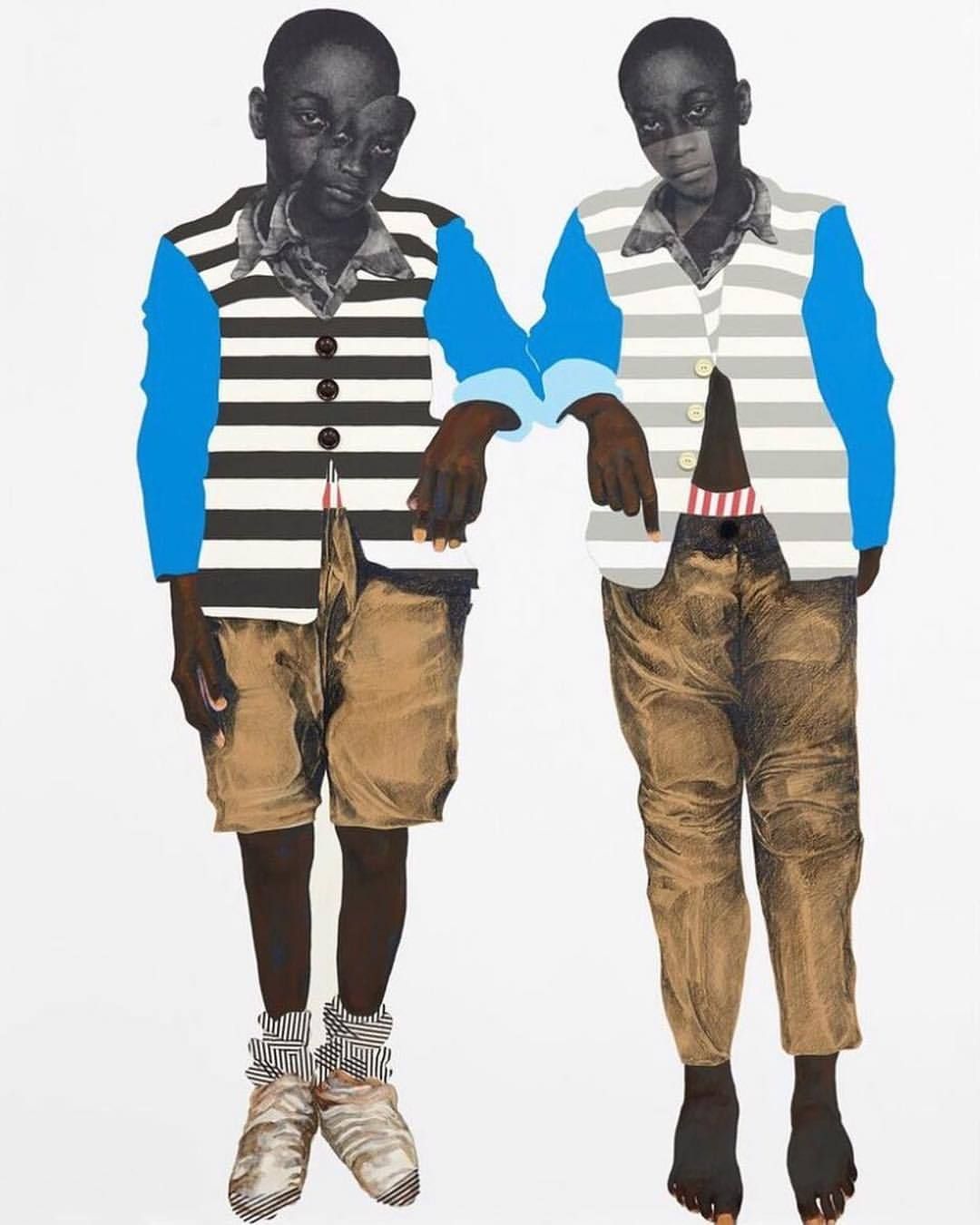 He Looks Like Me, 60x48, mixed media on Ampersand Gessobord

Q: By using collage and found image elements in your work, the subjects are real children with very real histories and experiences – how do you discover and select the Black boys and girls you feature?

I do a lot of research to look for faces that speak to me in ways that whatever story I want to tell at that time. Sometimes you need that innocent face as the base for these collages to build on top of. I understand that there are so many ways in which kids are discriminated against, are treated as adults, and things we don’t normally do with white children or brown children. When I hear these stories - it’s mostly out of disbelief. Sometimes people can change the course of your life or the light that existed within you simply by mistreating you over a period of time. So, when I hear these stories, I try to highlight them and ask people to please see these children and understand that they sometimes don’t have the life experiences to come back from the traumas that people inflict on them. I look for the most innocent faces because I think people at the core want to take care of children. That whole idea of caring for a child; it’s a young person. We have to take care of them. 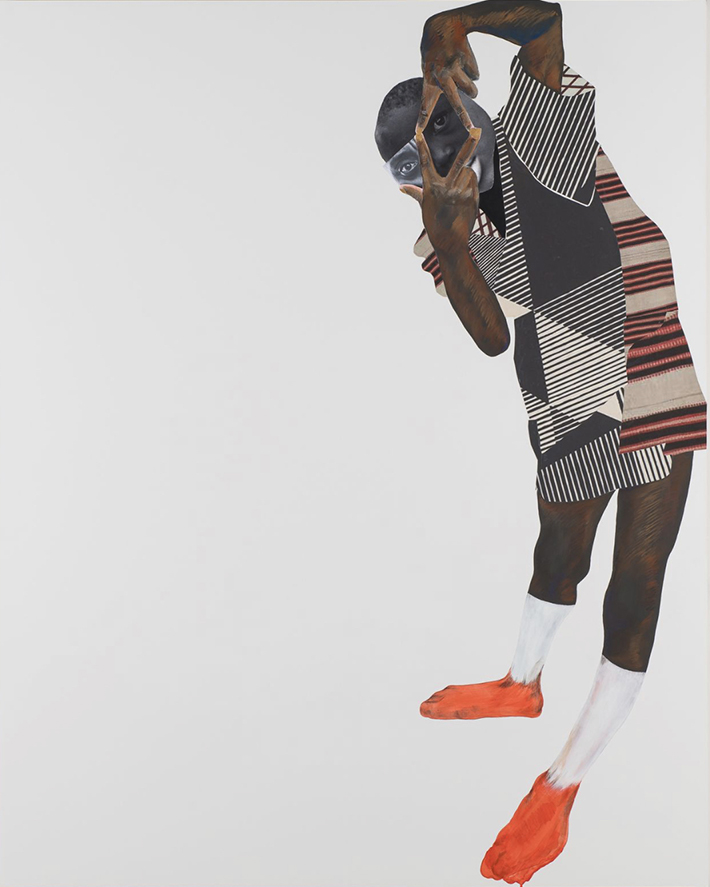 Q: Your pieces are often large with a lot of open space. What role does the subject’s relationship to the blank space play in your work?

Most of my work, except the Black paintings that I’m currently making, centers around “whiteness” and how that body moves around in that white space. When I move the works around, it’s talking about how we are trying to fit into that space. In 2020, when I started back in the studio after we all had to shelter in place, it felt like the figures didn’t want to be centered around whiteness. They wanted to take up that space, and I noticed that in the work, and I was quite surprised by that. So, I pushed that narrative forward, and it’s still present in some of my work. The work now has reduced back into that space. The black paintings have allowed me to use different colors so that when you first look at them, you still see white first before you see the image, and that is also how sometimes life is. Two people can have the same experiences, one being white and one being black, and the outcome can be horrifically different. In my work, if we try and treat people equally, we all have the same experiences. So, as all these things relate to children, it is to start fresh for the young, treat them equally, and then raise them to be great citizens of the world. 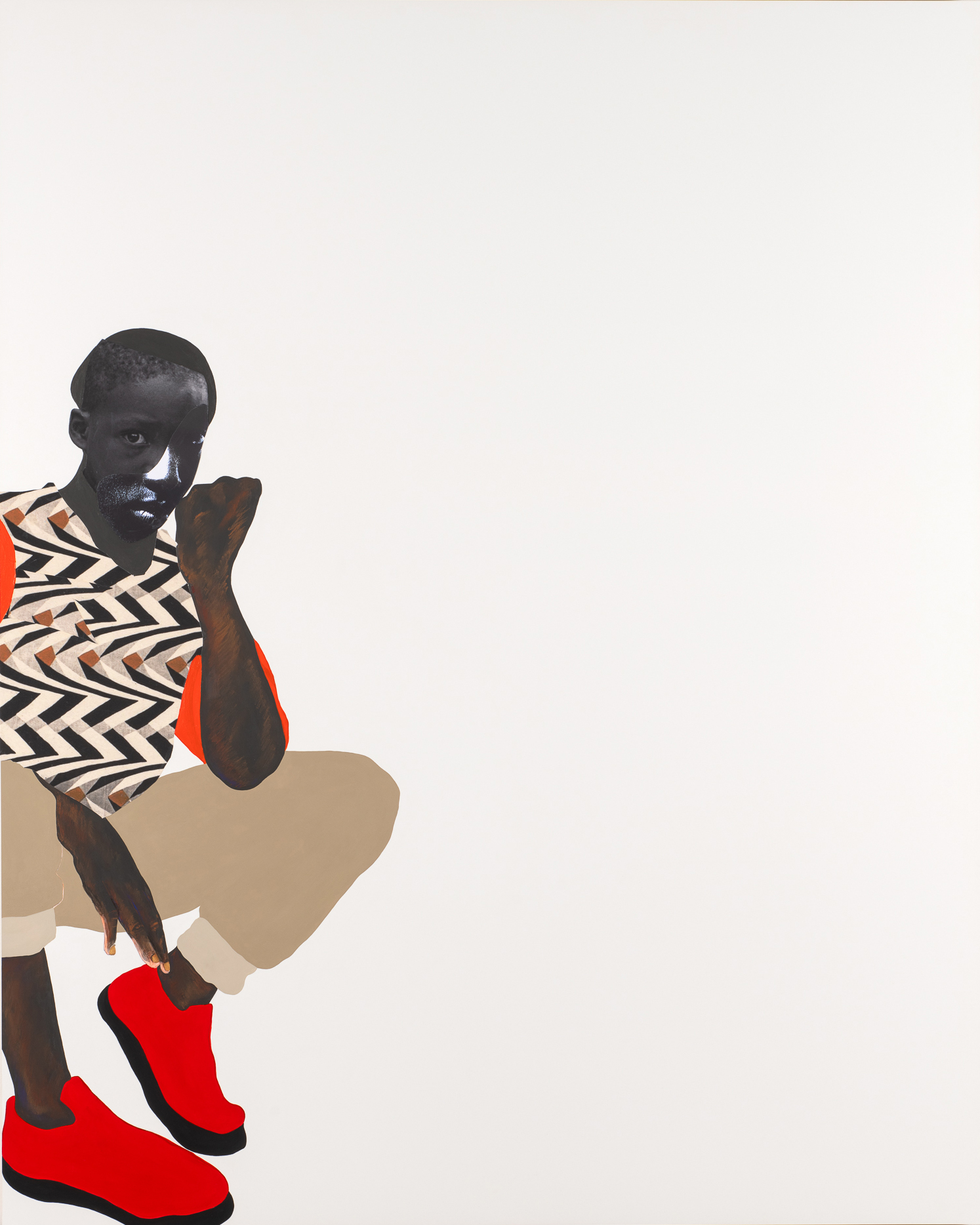 Q: Your work is meant to make eye contact with the viewer for a human experience. What are you hoping they are walking away feeling?

When I was young, I never used to look people in the face. I would look away. I was shy in that way. But I feel when you make eye contact on a human level, and you really, really see them, you can’t help but become one with them. Because once you see someone, I mean really see them, you can’t dehumanize them. I’m asking for that human connection, that eye-to-eye. That’s all I’m asking. We are more alike than we are unalike, and I think that interaction, that face-to-face, eye-to-eye contact is so very important in the work.

Q: You owned an art gallery in Austin, TX, for a while. How did that experience help you with working with galleries and museums today?

It was a good experience. Galleries are trying to survive, and it’s tough, so you have to have great contracts. I think it helps me tremendously in my career. That stressful time with owning a gallery, I didn’t realize that it set me up for this type of experience later in life. I’m glad I had it. Will I do it again? No, but it’s a great experience to have. It was a master class. 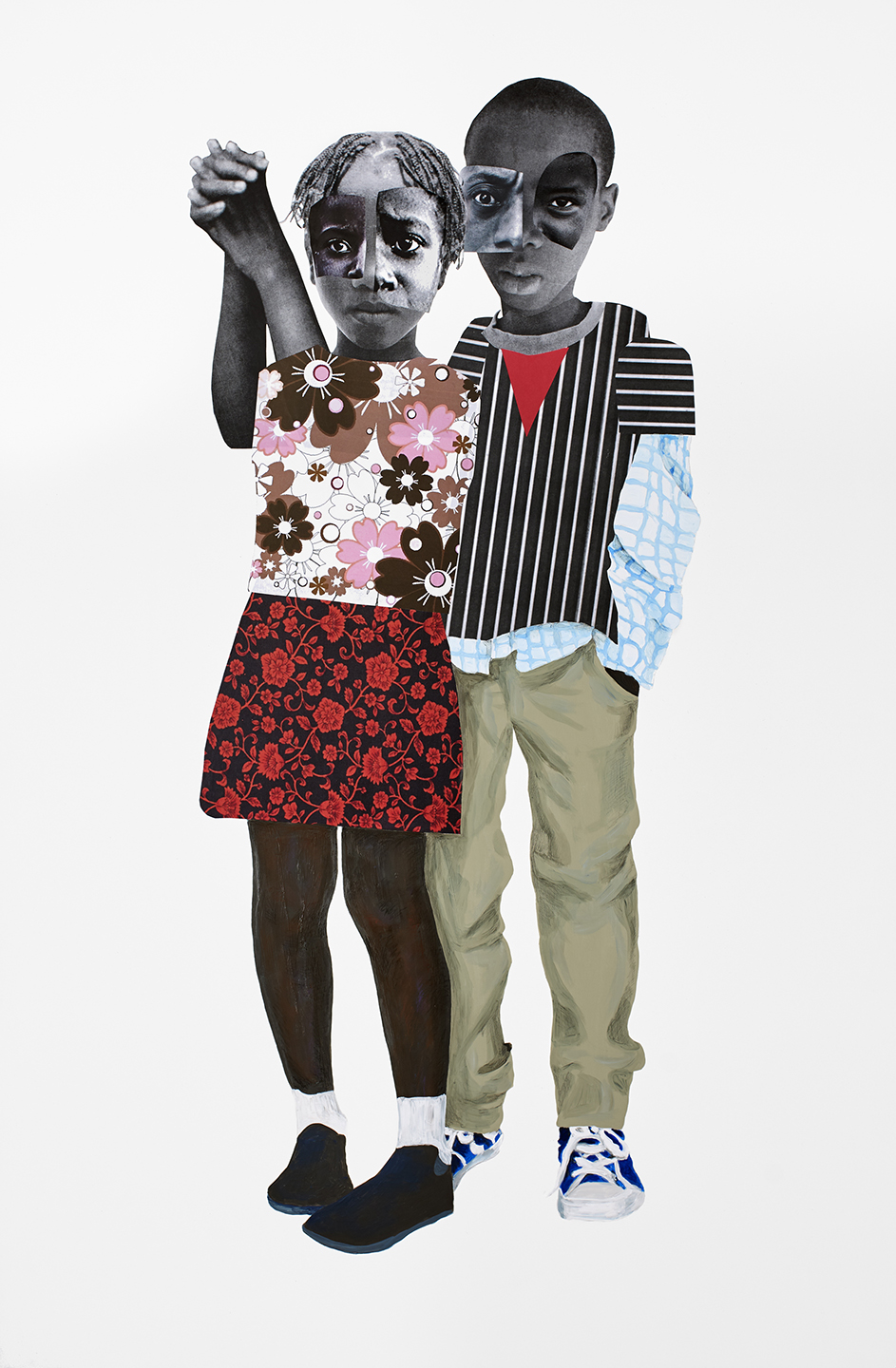 Our Destinies are Bound, 60x48, mixed media on panel

Q: In 2017, you worked at a chain retail store to help make ends meet. Then you got the call for the Volta Art Fair in New York City, where all of your work sold, and your career has since taken off. How did this affect your work and your art practice since that time?

It did not change my art practice whatsoever. When I did the show at Volta and sold out that booth, I didn’t come home and say, “Oh gee, that was great! How wonderful!” I hit the gas. I started creating more work and was still trying to get that language out. I’m still working and doing the things I’ve always done in the past, so my practice was the same. Yeah, my life changed. Yes, I had more shows. I had more attention. I didn’t expect any of it, not really if I look back on it. One of the things it did teach me was that I had something to say, and I could say it. 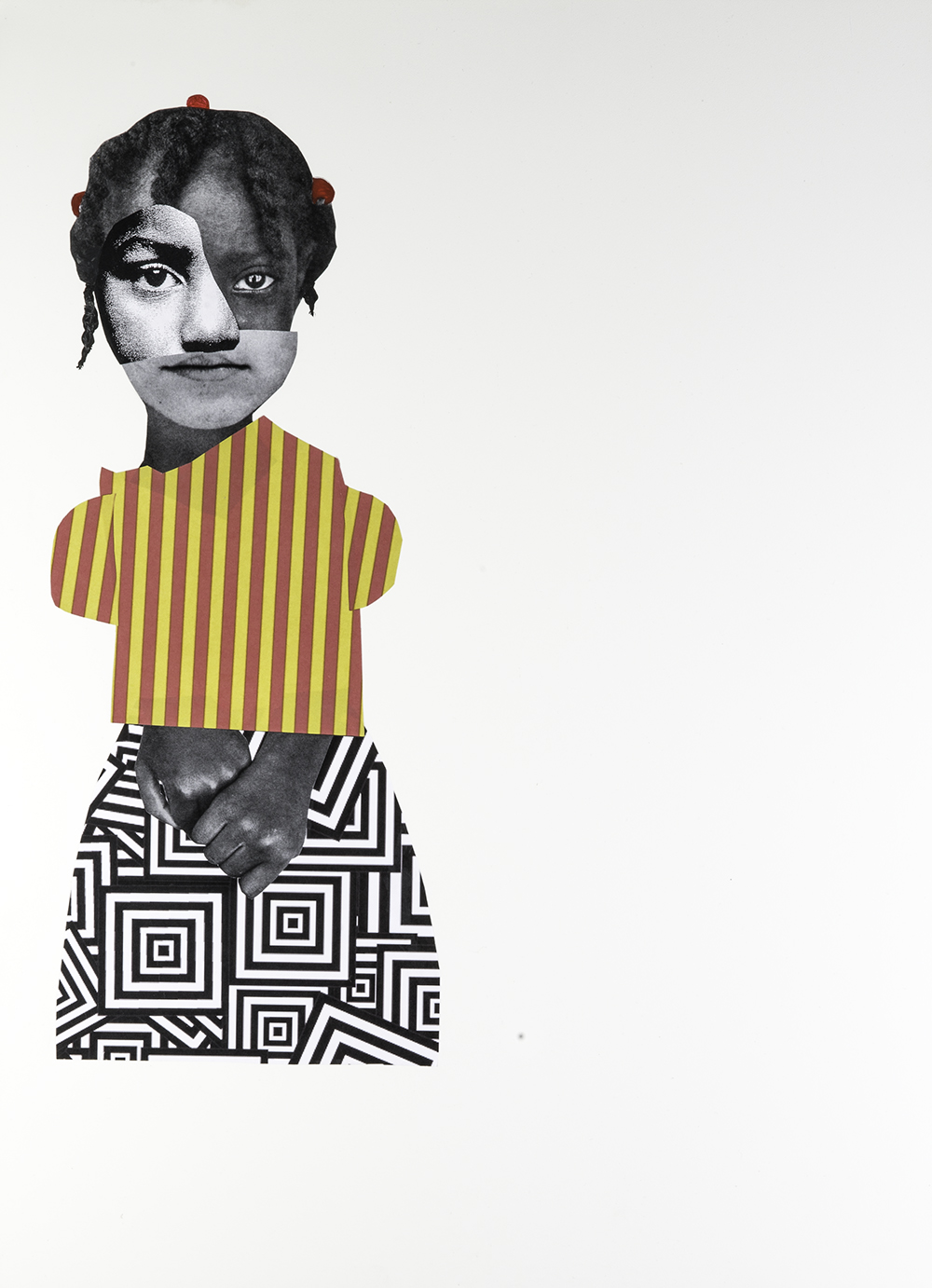 I put my 8-year-old face in some of the work, so of course. Some of those experiences I highlight in the work are my experiences; not all of them, but some. I think that a general feeling about growing up as a Black woman, some of the experiences and traditions, and the generational stuff still exists, and we still have to fight those battles. So yeah, I see myself.

I’m highlighting a story that happened in London where a little girl was strip-searched without her parents. That never happened to me, but the humility of all that is horrible. But other things happen – I can’t relate to that, that was so traumatic – but I had a 6th-grade teacher who was horrible, and so I think that things happen even on the pain – you can’t take apart pain and say, you know, that was more painful than this, and it was still pain.

So, that’s what I try to do in my practice. Show that while things have changed, certain things stay the same.

Q: Is there an artwork of yours that holds a special meaning to you or was particularly challenging to make?

They’re all special in their own way. Some of them fail, you know. Not all of them are a success. There are certain pieces that I keep as a part of the series. But I don’t have any masterpieces. I think “masterpiece” is a way of saying that’s the best I can do. I believe that I could do better. I want to keep that carrot in front of me that I have to keep reaching for. So, I don’t have any masterpieces. Hopefully, I have excellent work that speaks to many people, but the masterpieces are yet to be created.

Q: What do you love most about Ampersand Claybord and Gessobord for your work?

I love it! I love it because I think that the collages adhere to it better. What I need to say and do on a flat surface works better than paper and better than canvas. It lends itself to a flatter nature which I love. I mean, I paint flat, and the Ampersand board just works beautifully. It’s beautiful. All I got to say. 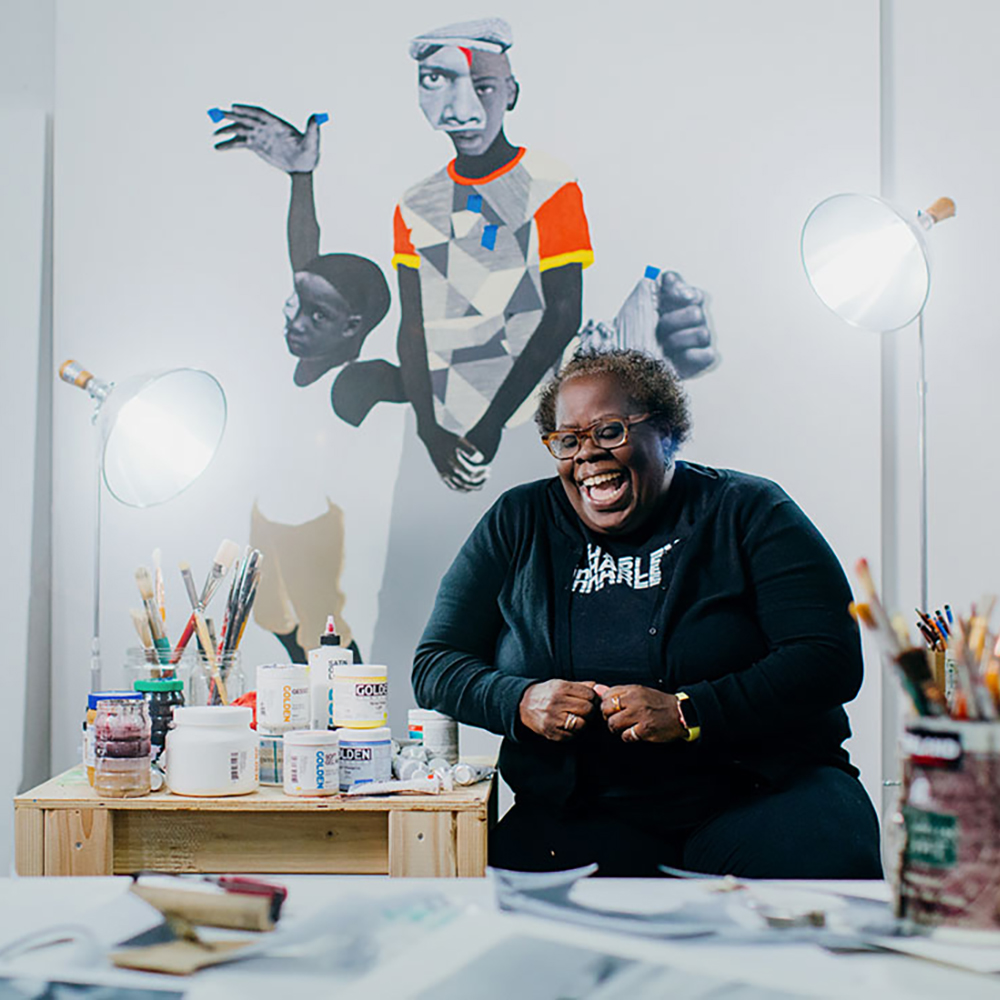 Deborah Roberts’ (American, b. 1962) work has been exhibited internationally across the USA and Europe. Roberts' work is in the collections of the Whitney Museum of American Art, New York, New York; Brooklyn Museum, New York, New York; The Studio Museum in Harlem, New York, New York; LACMA, Los Angeles, California; the Virginia Museum of Fine Arts, Richmond, Virginia and the Blanton Museum of Art, Austin, Texas, among several other institutions. She was selected to participate in the Robert Rauschenberg Residency (2019) and was a finalist for the 2019 Outwin Boochever Portrait Competition, as well as the recipient of the Anonymous Was A Woman Grant (2018), and the Pollock-Krasner Foundation Grant (2016). Roberts received her MFA from Syracuse University, New York. She lives and works in Austin, Texas. She had a solo exhibition in 2021 at The Contemporary Austin. Roberts is represented by Stephen Friedman Gallery, London and Susanne Vielmetter Los Angeles Projects, CA. To see more of Deborah's work, visit her website, Instagram, and Twitter.

Great interview! So many unexpected revelations…thank you.

I am a huge fan of Deborah's work and I really loved this interview.

Deborah Roberts is a great artist. Love what I've seen here. Love the space to breathe.

Finding Deborah Roberts while teaching online during the pandemic was one of the high points for me.