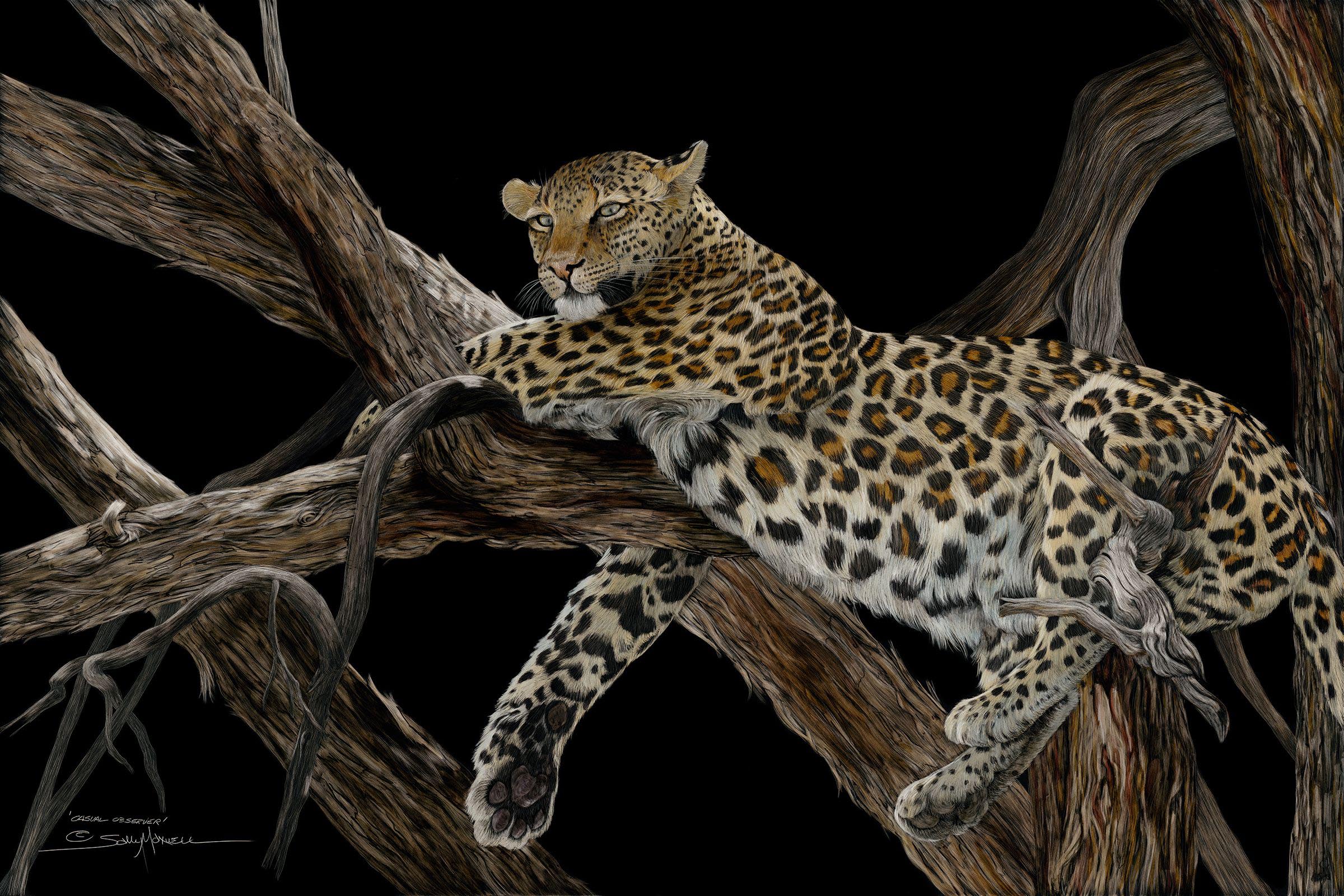 Sally Maxwell has been working with scratchboard for over fifty-three years and has helped to define it as a fine art medium. Finding inspiration in animals and her own colorful garden; each piece is a snapshot of the intensity that nature can possess in its quiet moments.

Ampersand's partnership began with Sally years ago when she walked through our doors. Sally's work can be found on Ampersand's Scratchbord label and numerous Scratchbord Project Kits. 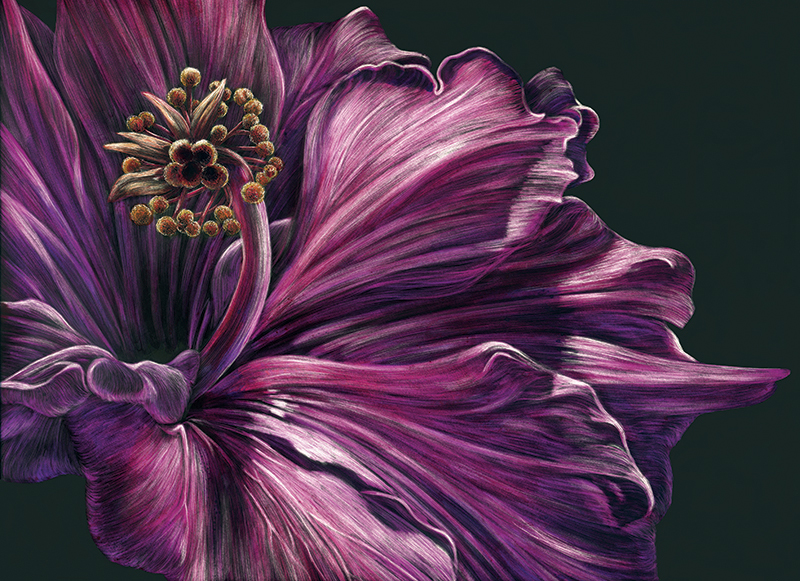 Q: How did you first discover the medium of scratchboard?

A: My first husband and I had started a graphic arts business in our small town, and he had gone to the big city to get art supplies. He came back with a book written by Merritt Cutler called How to Cut Drawings on Scraper Board. He also had several small pieces of Essdee scraper board and two different tools. I was the illustrator of the two of us and used to do pen and ink drawings of parts and products. He felt I would like to try this as a new illustration medium. He was surprised how much I loved it. Not only did I draw parts for lawnmowers and communication systems, but I also did restaurant ads showing what they served. 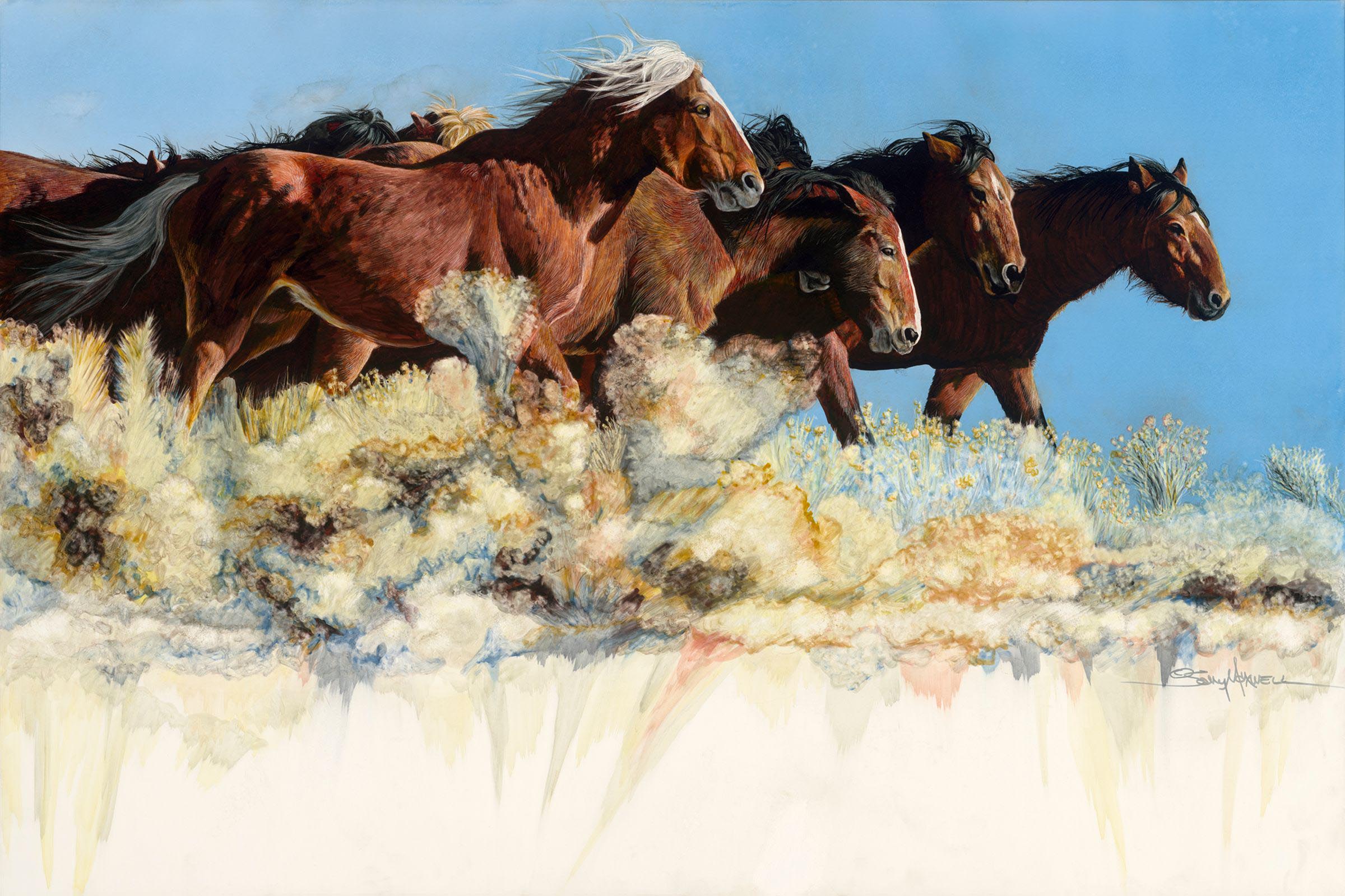 Q: Your pieces probably take a good amount of time to complete. Do you work on more than one piece at a time? Or do you finish one before starting another?

A: I always keep several pieces in the works because I never know exactly which one I will be in the humor for working on any given day. Usually, there are multiple sizes and sometimes multiple mediums with the second medium being Claybord and Pitt Pens. I also like to move from my tall drawing board while seated to standing at it and working on my large worktable. This gives my body a chance to move around. 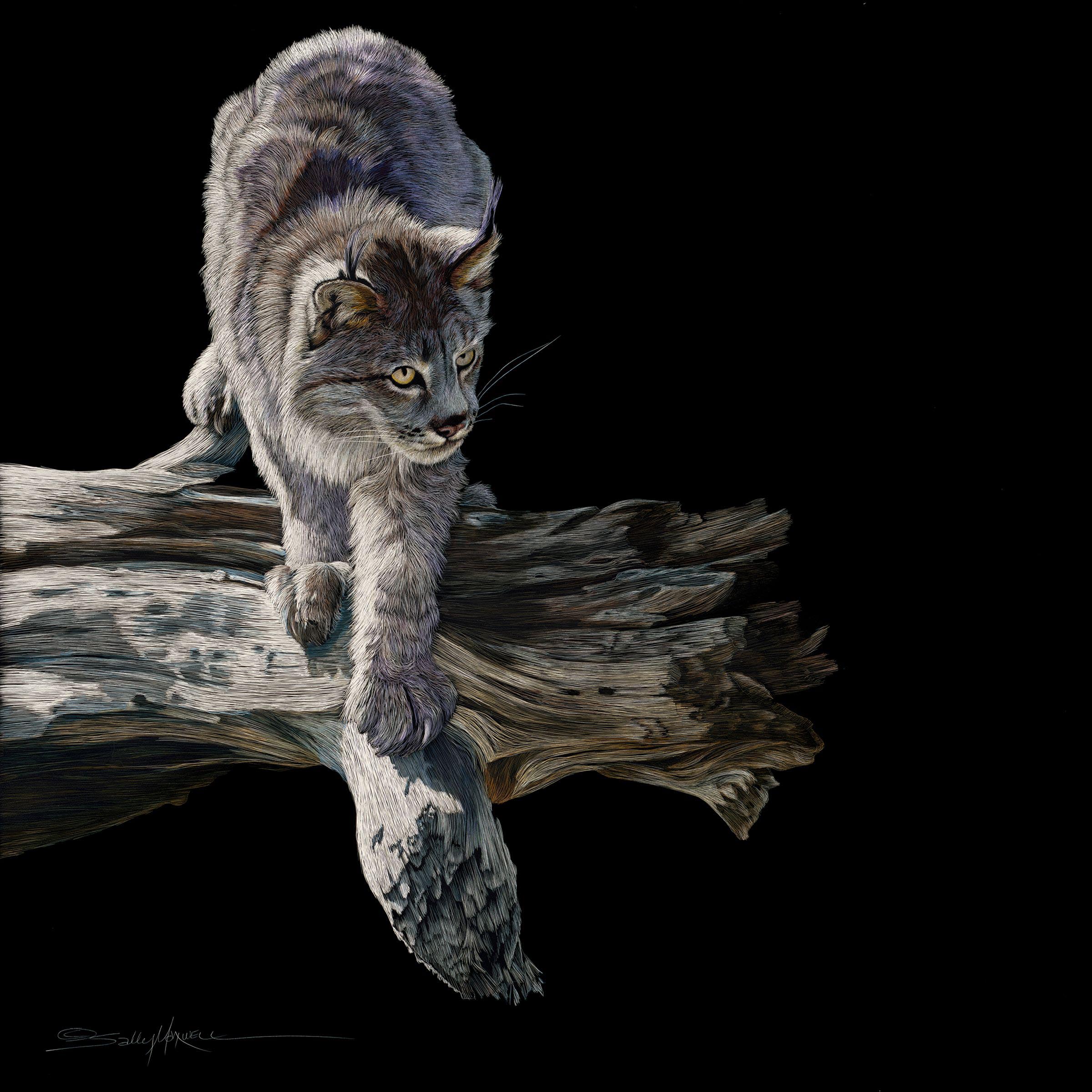 Q: What is the inspiration behind the use of nature (wildlife and botanicals mainly) in your work?

A: Well, it started just because animals were the most logical thing to do in a medium that shows texture so well. I had an inherent love of animals that had not been fully realized at that time. The outdoors also meant a great deal for me. 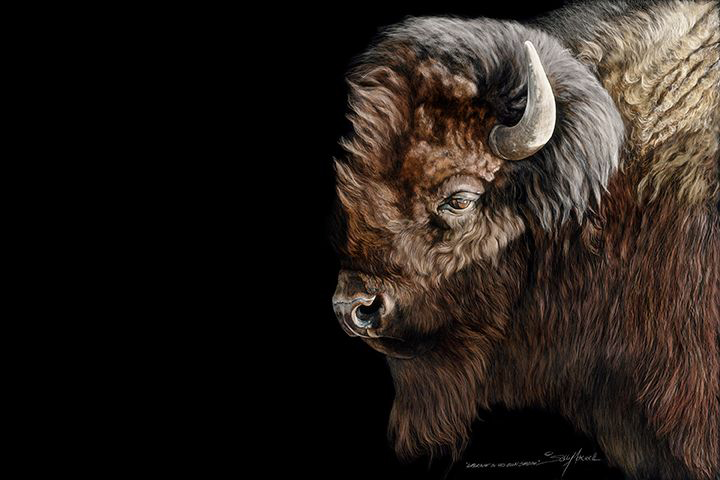 Walking in His Own Shadow, 24x36, colored ink on Ampersand Scratchbord

Q: The use of the black of the Scratchbord as part of your work is striking. How do you determine the composition of each piece?

A: First of all, I can say I do not subscribe to any type of compositional theory. I use my gut instincts on it. I determine whether I want something to be comforting, or perhaps jarring. I use my pieces to say something now. I want to have people walk away with a new understanding of questioning something that will show they have interacted emotionally with my work. I have always loved mathematics and took to them quite easily in school, so I feel that I have an engineering portion of my brain that helps with my design sense.

I also do not feel obliged to use up every piece of the medium I am working on. I feel that negative space is a very important part of a design. I am slightly a minimalist, but the amount of time and work I put into the detail would probably deny that.

Q: Can you walk us through the process of one of your pieces from the reference photo(s) to framing?

A: The first thing that has to happen is I must love the photograph I’m going to work from. I take as many of my own photos to work from as I possibly can. Sometimes I am asked to do a specific subject matter that I have not been able to get a photo of, but I have a lot of friends who are photographers who are willing to share theirs with me. What normally happens is I am in tune with what’s going on in the world right now, and certain poses of animals lend themselves to a situation that could mimic our world. The next thing that happens is, I determine how much to leave out of the original photo or what to add to it from a different piece of reference to say what I want to say. The size and shape are determined at this point. Then I normally will blow up the reference material to fit the size that I feel is necessary for my layout. I used to do pencil sketches, small thumbnails, etc., but I pretty much know what I want to do and what works ahead of time so that is no longer necessary for me.

The enlarged photos are then trimmed and laid out on my sliding glass door. I will keep moving them around until it’s satisfactory and perhaps even changing the size of something. I use the sliding glass door as a super-sized lightbox. I use huge tracing tissue that is taped over the final arrangement to show the important lines. Those include the outlines, of course, and any changes in the hair, the shading, and especially in the facial features. That cartoon is then transferred to my board using chalk on the back of it and re-drawing the lines. I treat it like I would any size scratchboard and draw my guidelines in first.

I do not necessarily have a pattern of how I work. Sometimes I start with the eyes and sometimes they are the last thing I do. I allow myself to work on what feels best for me physically as well as what I need to do. An example would be that stippling can drive you nuts or help you work something out. Multiple parallel lines such as in the backs of animals often are very soothing for me.

Once the black-and-white phase is completed, I set it aside. I normally have three or four things in that stage ready for me to add color to. It takes a completely different mindset for me to add color to my scratchboard. Once I get to the point that I can work on color, I start with the smallest ones first and then work my way up to the large. They all need to dry and harden before I can go back and do my second cut.

The second cut is not normally the final cut because I will go ahead and put a faint wash of other colors back over the white that I scratched out to. This is what gives everything a pop once you do the total final cut of only the area that the light is hitting. Once all of that is done, I then varnish it from each direction totaling four coats using UV Protect Lascaux spray varnish. It is expensive but worth it. I allow it to dry for several days before I frame it. 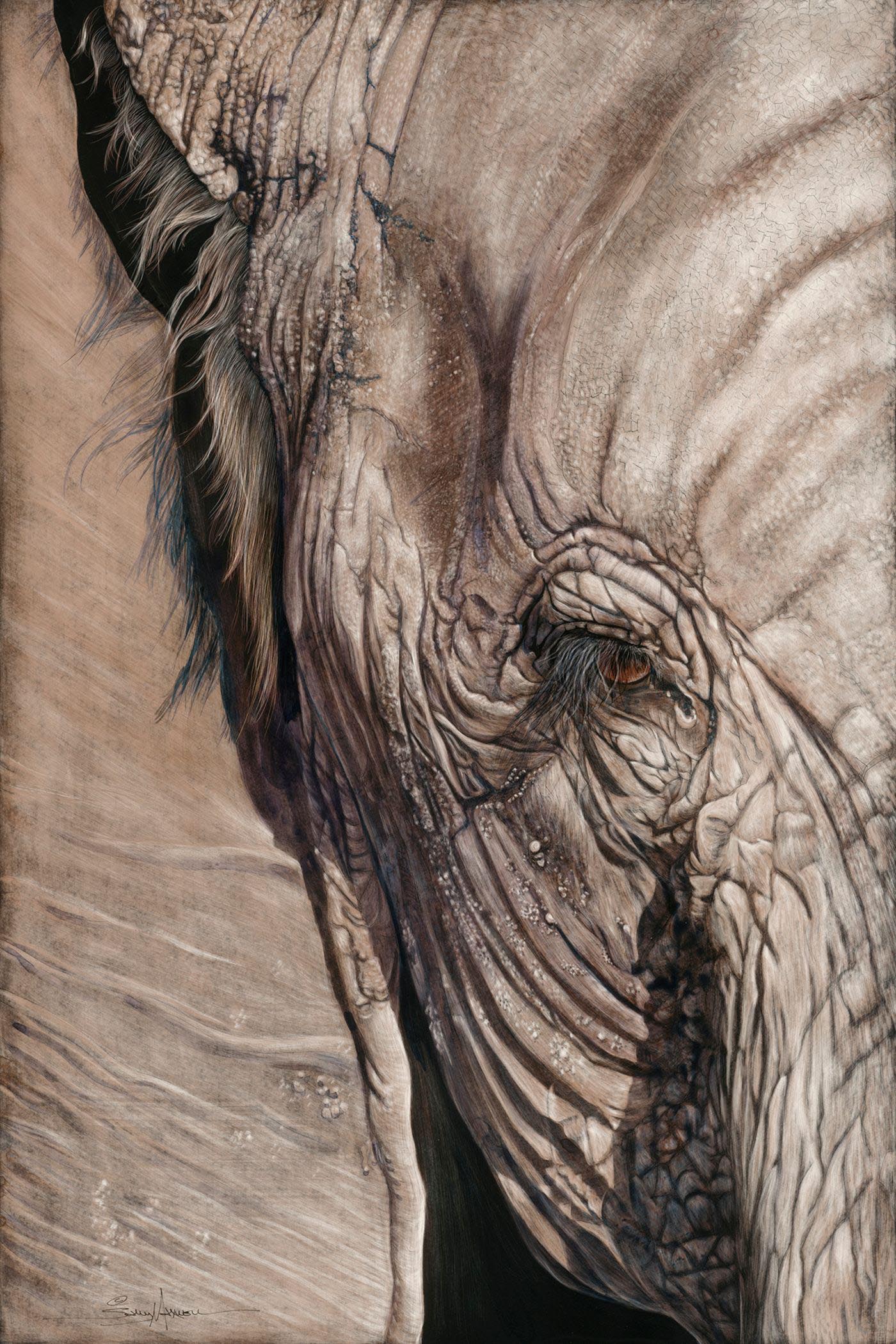 Q: As a pioneer of scratchboard is there a certain pressure to keep discovering where to push the medium?

A: Totally! Once I gave away all of my secrets and spread the word about Scratchbord I’ve tended to find clones out there who wanted to do everything the way I did. When I started to see so many people doing it, I still wanted to stand out so yes, I started doing large because I had the courage to. I also started experimenting even more with different textures and techniques. I also started digging deeper than just doing an illustration. This truly helped to make me into an artist, not an illustrator. And there is a very big difference. I am still trying out different things because I do not think everything has been discovered yet. It is a whole new frontier. I think Ampersand’s products have opened frontiers for watercolors and wash and many other mediums. 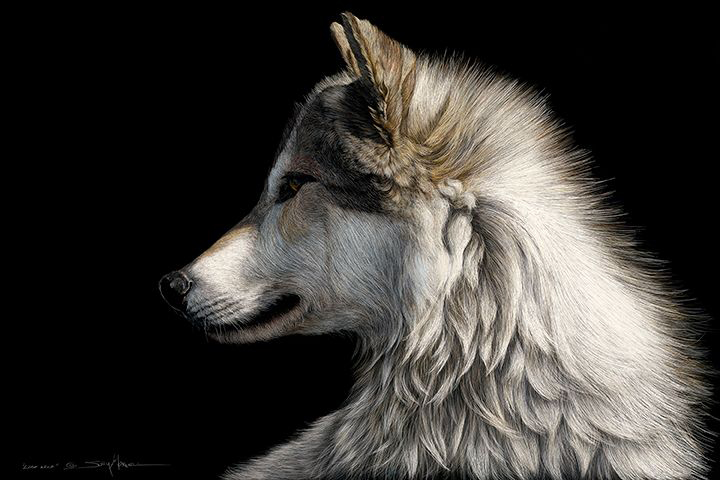 Q: The day you walked into Ampersand in the mid-90s is the stuff of legend around the office. Can you tell us a little about that day?

A: Let me start at the very beginning. We subscribed to the Austin American-Statesman newspaper, and I had read an article in it the business section about a new business opening up in Austin. I said out loud after I finished it "Hey, this sounds like scratchboard." It was before the Internet, so I called directory assistance and got the phone number of Ampersand Art Supply. I boldly called them and introduced myself as an artist using scratchboard, asked to speak with someone in charge of marketing. Once I got him on the phone, I said that I was using color in my scratchboards and that I had something they might be interested in. I told him that we should get married because we both could help each other. I explained that I had made a "how-to kit" several years ago that another company had rejected.

He made an appointment to see me the very next day. That was easy to do because Karma had placed them only an hour away from my studio. I had never been in a manufacturing plant quite like this one. It was very casual with couches and coffee tables in their conference area. I showed him some of my originals and met Elaine, who explained how the business had come about. I showed them my kit, which at that time also contained a mat board and the box itself could be flipped around to serve as a frame. With their product none of that was necessary. I was enchanted and I think they were too, and we decided to get married. The rest is history! 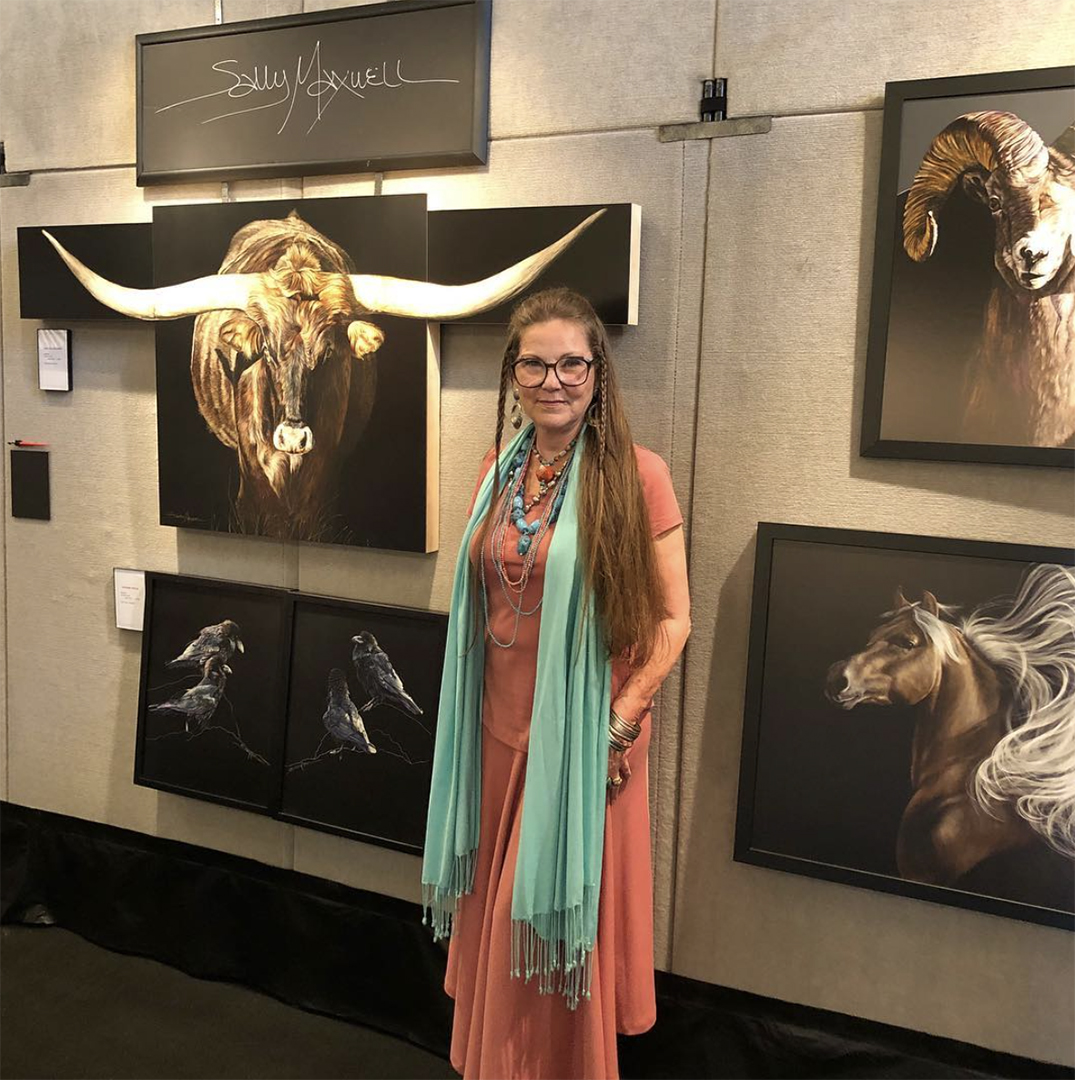 A native of Illinois, artist Sally Maxwell has been working with scratchboard for over fifty-three years. Shown in galleries throughout the United States, her work is renowned by private and corporate collectors for its ability to capture the beauty and emotion of the wildlife and the natural world.

Since childhood, Sally has found inspiration in animals and her own colorful garden; each piece is like a snapshot of the intensity that nature can possess in its quiet moments. Sally’s work tells stories and suggests relationships through subtle details such as the way two creatures lock eyes or snuggle next to each other.

Sally has helped to define scratchboard as a fine art medium. Working with scratchboard allows Sally to layer up rich, deep colors and capture minute details, and her innovation and experimentation with new tools has given her the ability to produce a softer, less linear technique.

Sally works from her studio in the countryside of La Grange, Texas, where she lives with her husband, George. She takes frequent trips with friends and family, always with a digital camera to capture interesting flora and wildlife she finds on her adventures. Sally has won many awards and shows her work around the country at upper-tier Art Galleries. To see more of Sally's work, visit her website, Facebook, and Instagram.