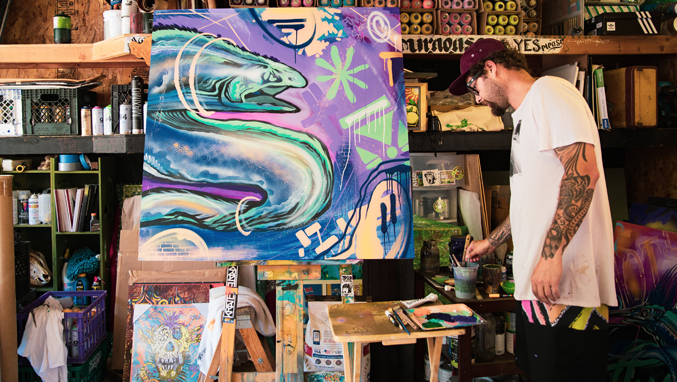 When Ampersand launched our largest surfaces ever, we wanted to collaborate with artists whose experience is primarily creating on a big scale. This led to our collaboration with aerosol artist Taylor Reinhold. Born and raised in Santa Cruz, California, Reinhold attended Santa Clara University. In 2009, he founded Made Fresh Crew, a collective of artisans ranging in talents from glass blowing to painting. Since then he has worked to promote creativity amongst the youth through artistic community outreach projects. 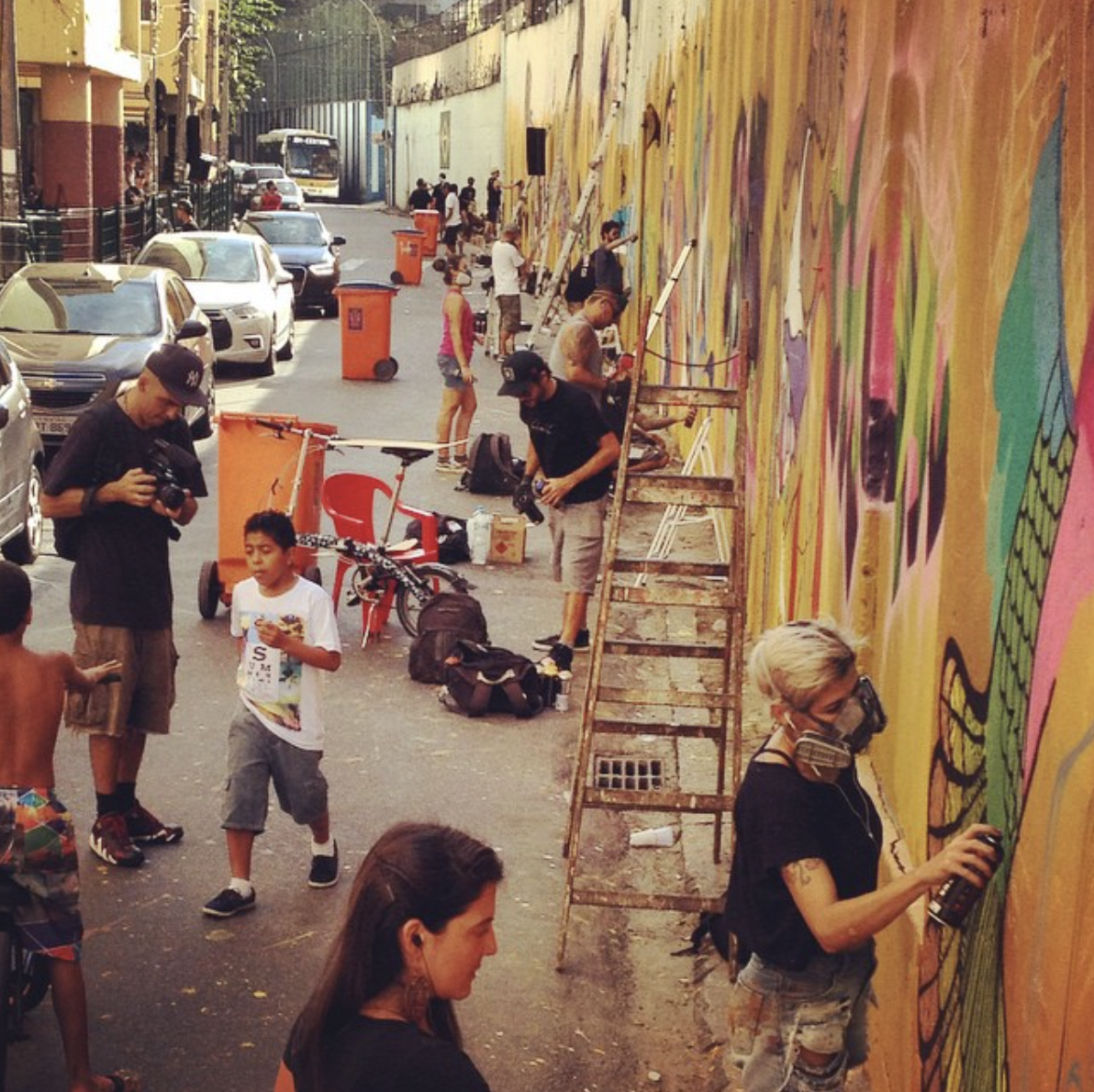 Q: In 2015, you spent five months traveling throughout Latin America trading mural paintings for food and housing. What kind of lessons did you bring home after that kind of experience?

A: Traveling alone abroad has taught me more about myself and inspired major change in my lifestyle and how I communicate through art as an international language. Every place I travel to I enjoy learning about the people, culture, and history. Coming back from Brazil was one of the highest points in my life, meeting so many artists and being able to paint more in five months than I had in ten years. What people in the States forget is how important life can be when we work together for a common goal instead of thinking in survival mode. Painting in some of the most dangerous places in the world and giving back to communities that actually need art has been the most exciting and heartwarming gift I can give as an artist. 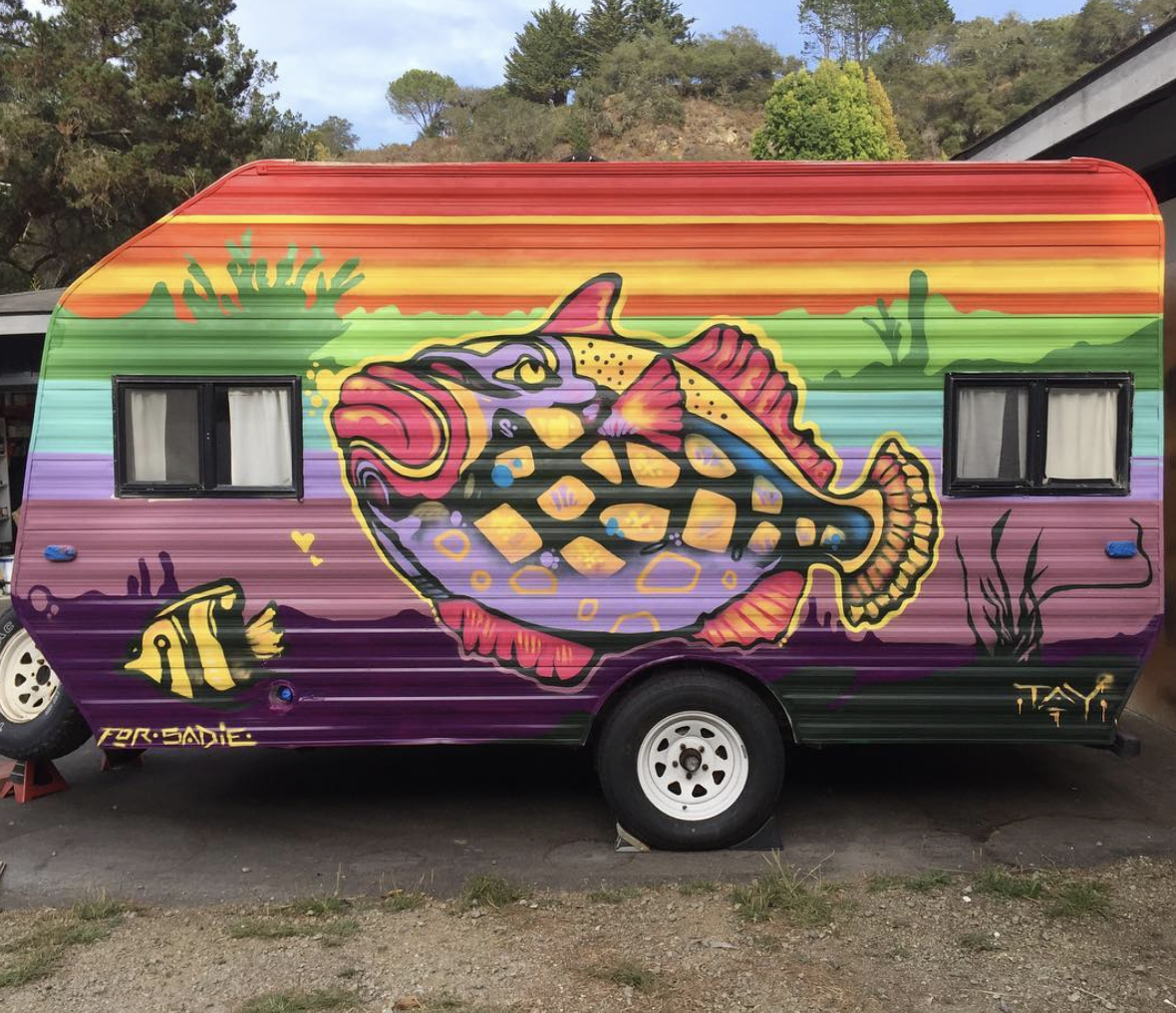 Q: You can find your art on anything from socks to garage doors to RVs to walls. So far, what do you feel has been your most accomplished piece?

A: I can’t pinpoint an exact piece, but I think some of my favorites have been: donating walls to villages in Tanzania for the Tanzania school foundation, painting in the Favelas of Rio De Janeiro for a graffiti jam with 65 national artists, and working with my community to create public art projects about plastic pollution and teaching youth about ocean conservation. 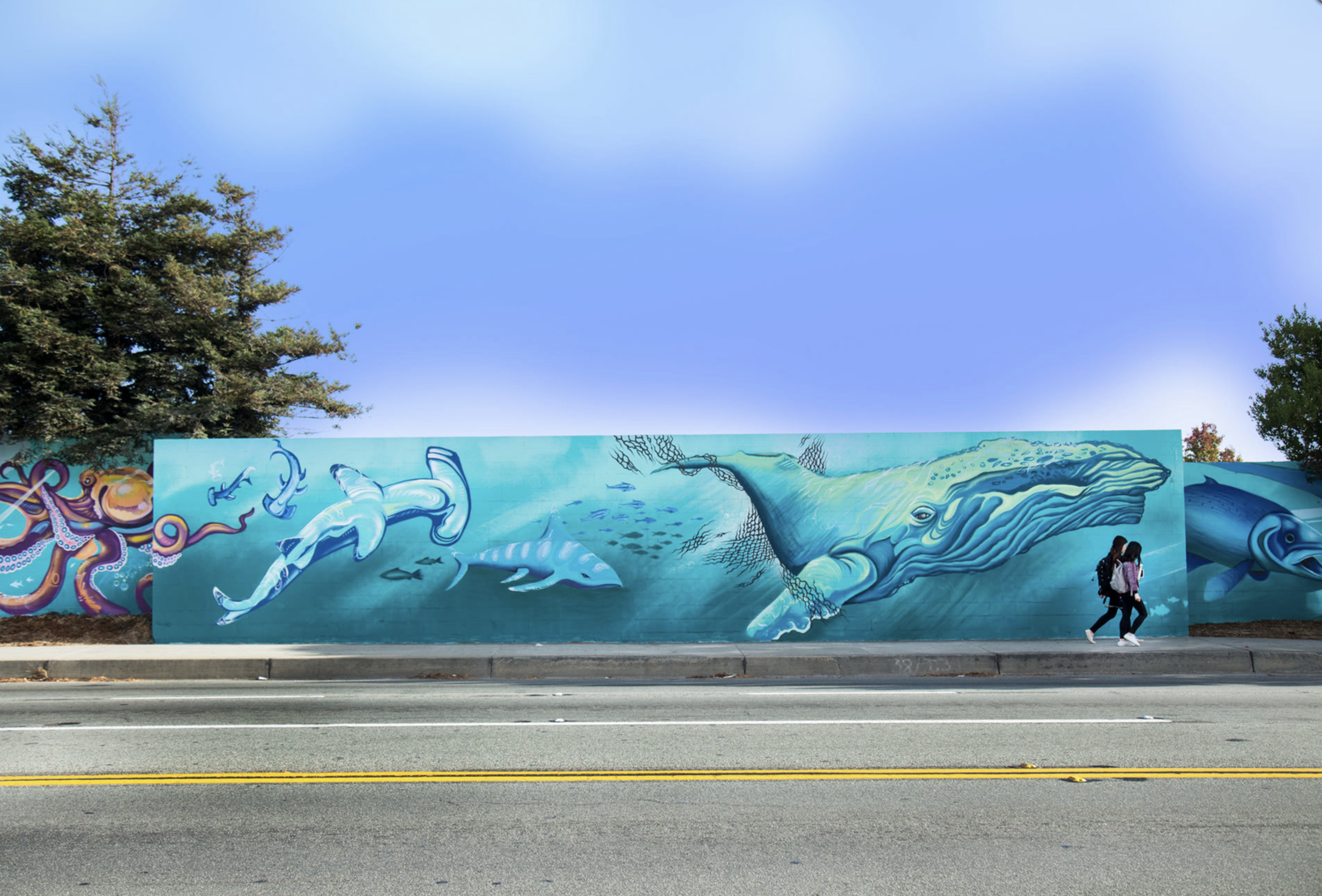 Q: The Made Fresh Crew joins forces to create massive, beautiful murals. What kind of planning is involved in, for example, the Mission St. Mural in Santa Cruz?

A: That project was unlike any other mural for me because of all the footwork it took to make a project of that scale come to life. I worked with the City of Santa Cruz, Cal Trans, School District, Economic Development, and Clean Oceans International for two years. We wrote grants with the city, local foundations pitched in, and just over 1400 individual contributions from the local community. We worked with the students at Bay View Elementary to pick the species most affected by plastic pollution in our Monterey Bay. Working with my ten best friends to paint the largest mural in our town has been one of my favorite moments of my life.

Q: Your crew has yellow vests that say "Made Fresh Crew at Work". Had you ever been chased away while working on a project before these?

A: I won’t go into detail but… I got really good at running fast and jumping fences in my youth.

Q: You were new to painting on Ampersand surfaces. When you first tried Ampersand Gessobord, what stood out the most about the surface compared to the other panels you had painted on in the past?

A: Coming from a background painting dilapidated brick walls, old cinderblock, and wet damp tunnels sometimes with bugs crawling out of them, the Ampersand surface is like skating on ice compared to what I am used to. I love the durability and I felt like my lines were cleaner and my fades and brush strokes were softer. I don’t see myself going back to painting canvas any time soon. I'm even thinking about just building a tiny home out of them that I can live in and paint over and over! 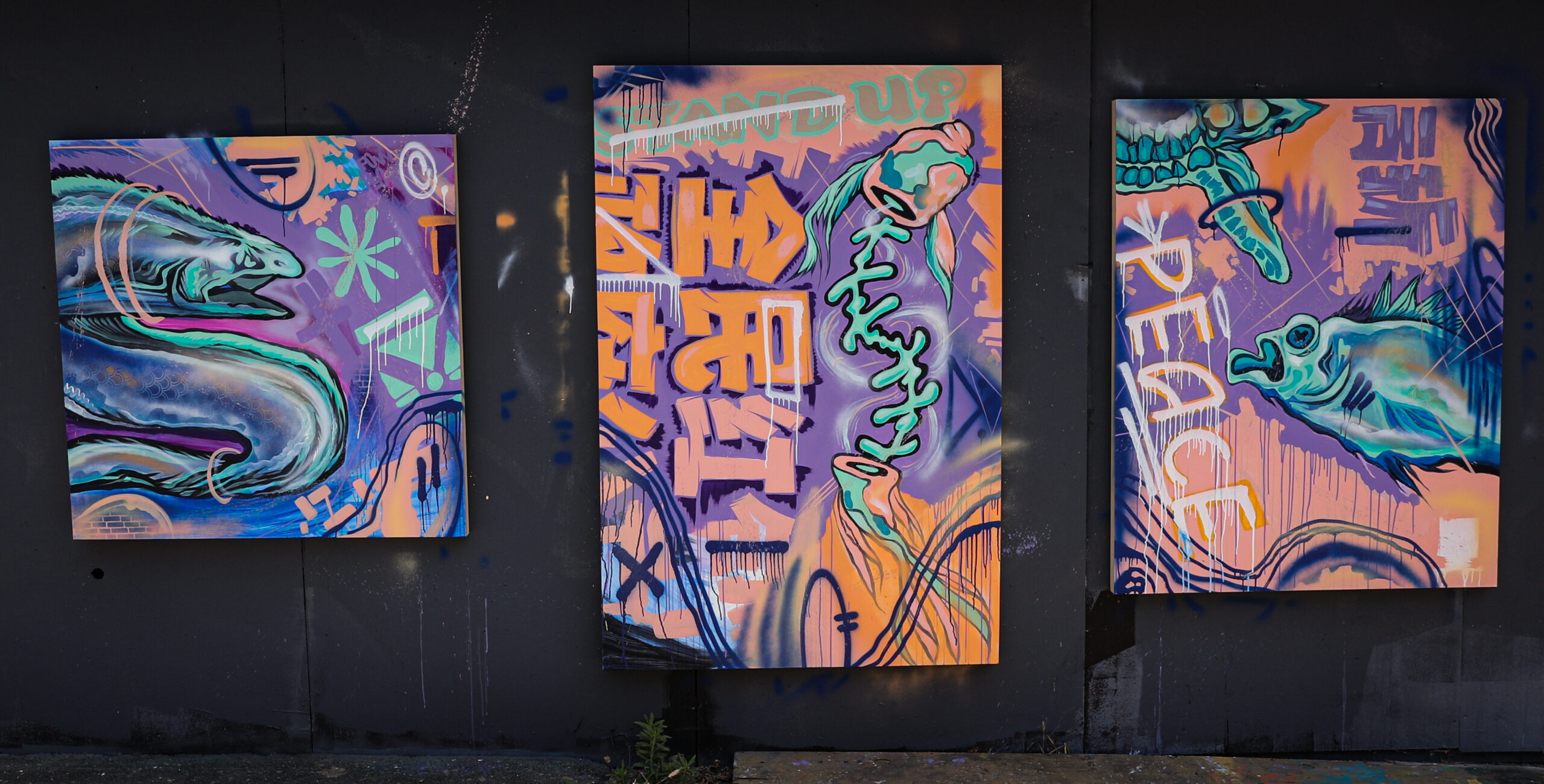 Q: To most artists, 48"x72" is a large-scale painting. Do you find it more challenging creating on a small scale or larger scale mural painting?

A: The bigger the better. This was actually the first time I have painted on panels this small in years. I have trouble painting anything smaller than 10’ by 10’. I think once your brain gets used to focusing on a larger scale it gets harder to downsize. That and the fact that I have way too much energy, it makes it hard for me to sit in one place. I enjoy using my entire body and climbing up and down ladders.

Q: You are also the art director for PangeaSeed Foundation and Sea Walls Santa Cruz; a groundbreaking ARTivism program that brings the message of ocean conservation into the streets around the world. Share how others can get involved.

A: Through education and awareness, PangeaSeed works with local artists like me to curate mural festivals on islands and coastal regions. Working with some of the world's most prolific muralists to curate sight-specific pieces about local environmental issues our oceans face. As ARTivists, we are working together to solve this environmental crisis. You can get involved directly for the Sea Walls Santa Cruz Project here: https://seawalls.org/activation/santa-cruz-usa/ 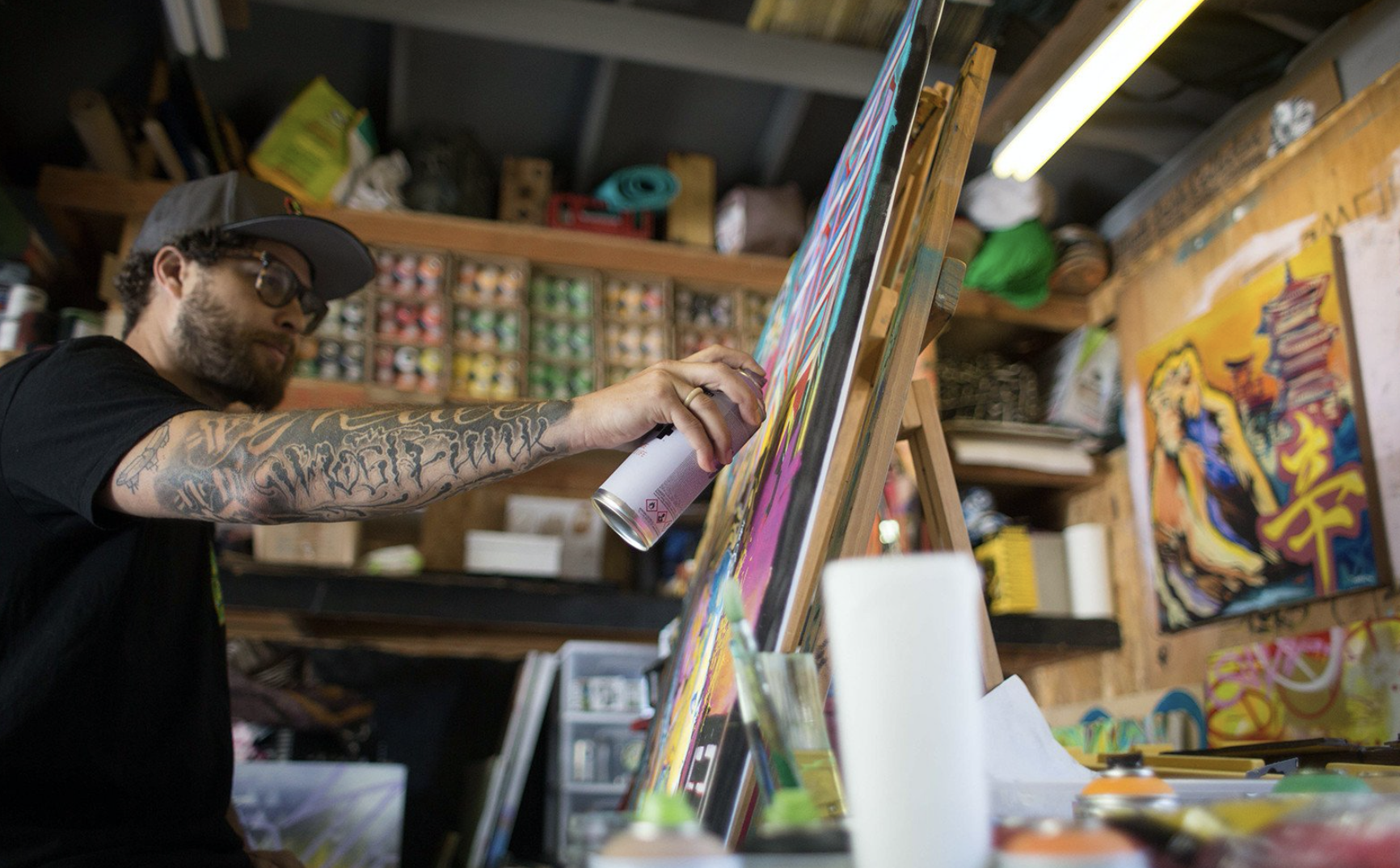 Taylor Reinhold was born and raised in Santa Cruz, California, and attended Santa Clara University. In 2011, he was granted a National Endowment of the Arts Award to co-curate the first-ever Urban Arts Festival in Watsonville, California. The event aimed to educate youth about sustainable art, public murals, and silk screening. Since then, he has taught art and mural classes for Mariposa's Art and created multiple community-based art projects in the County of Santa Cruz. Perpetually creating, Reinhold currently designs and produces original, handmade clothing and wearable art with fellow skilled artists in the Made Fresh Crew art collective. In addition to producing clothing, Reinhold also enjoys painting and silk screening on objects from the urban landscape, such as recycled spray cans. He has an unrelenting passion for creating art and beautifying public spaces. Reinhold has found his calling in painting murals and continues to paint around the Bay Area. He has been contracted to do large-scale installations for Burning Man, Plantronics, Comcast, and LinkedIn with a couple more in the works. In 2017, Reinhold teamed up with the new sock company Merge4 to have his designs printed on socks. He currently has eight different sock designs, two of those being woman’s socks. Check out his socks here. He is an artist on the rise, featured as a Spotlight Artist in the 2018 Art Expo Las Vegas. To see more of Taylor's work, visit his websites taylorreinhold.com and madefreshcrew.com, or Instagram.