Ampersand Artist Ambassador Micah Goguen teaches about 50 students atelier style in weekly classes in the Middle Georgia Area. His overall vision is to focus and rededicate back to a "buy-local, shop-local" mentality that strengthens community through unity and purpose. Here are a few stories Micah wanted to share with us.

Ken Walker began his journey with art doing charcoal sketches under the instruction of artist Micah Goguen in 2014. As an ENT doctor, he didn't think that portraits would be his interest but as he continued with his art, portraits seemed to be a common theme.

"After a period of drawing for a while, I finally decided to introduce Ken to some color and paint," says Micah. We tried fluid acrylics and then acrylic inks but managed to stay in the realm of figurative work. Ken was willing to find his edge with the media and continued on a path following oil paints. I introduced him to Ampersand Primed Canvas Texture as well as the Primed Smooth for high-quality studies. Using the Primed Smooth and working with just two colors, he went through a series of portraits to study both the faces and also the color palette.

"The Primed Smooth was effective for showing brush strokes and exhibiting the colors of the paint," says Walker. "It was a different experience at first trying to build up the surface. The boards were slick and it took a bit of material before it started to adhere. The rigid surface allowed a lot more translucency in the colors which added depth." says Ken. I saw such enthusiasm for the products and the process with Ken, that I decided to challenge him further with mixed media concepts. At this point, he had tried both Primed Smooth as well as Canvas Texture with the portraits. When it came to the mixed media and especially when using collage elements, Primed Smooth was a favorite. We were able to get a smooth clean coverage when adhering papers which was important to the outcome of the piece. By layering papers, acrylics, inks, and modeling pastes, Walker began building up some 3-dimensional interest on these hanging surfaces.

Since exploring these mixed media portraits, Ken has entered a few into several shows receiving recognition. "He even won 1st place and a Merit Award with the mixed media portrait at the Georgia National Fair," says Goguen. "It was his very first time entering and he felt apprehensive at first. Winning multiple ribbons on one piece was very validating for his hard work," adds Micah. Just when you didn't think it could get any better, he sold the piece! Ken continues his color studies more intensively now, switching back between acrylic and oil. He enjoys sharing what he learns and is even teaching his first color study workshop to fellow students last Fall. It is a joy to watch students approach the creative process with such willingness. "They always give me new ideas," says Goguen. Ken even took a portrait workshop in Canton, GA to further his knowledge. We are all definitely interested to see where he takes his talents. When I first met him, he told me couldn't even draw a stick figure!

Melissa Sewell has been painting with acrylic with art instructor Micah Goguen in the Middle Georgia area since 2017. Melissa's journey began with simple studies of fruit on canvas. "Melissa had a great eye for detail. The texture of the canvas always left "pixels" on the image. It was hard for her to achieve the level of minutiae she was capable of rendering." says Goguen. 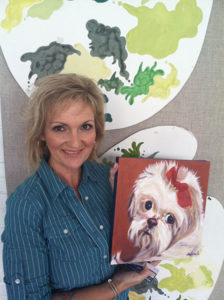 When she excelled in her first few projects, she wanted to do something more personal. She approached me with interest in painting portraits of her pets. I immediately recommended the Ampersand Primed Smooth panels for the project. As a teacher and a professional artist, I enjoy the Primed Smooth for its ability to show the strokes and texture of the paint. I also like the rigid support as it helps me make better predictions with my mark making.

When working with students who are creating their first commissions or elevating their quality of work, I always encourage the archival quality of Ampersand. Melissa had expressed how her pups were very special to her and most definitely members of the family. She used the 12x12 Primed Smooth for both pet portraits. "I loved that I didn't have to fight with the texture of the canvas when painting on this type of panel", says Melissa. "It took some getting used to as the surface was really slick at first. You really have to build up some material in order to layer." The paintings turned out great and Melissa has since entered them in her first two shows, one of which helped raise money and awareness for a local no-kill shelter "Looking back, I really prefer to paint on the Smooth Primed Surface. I like the clean modern look of it.

Kristine Davenport began painting in 2017 when taking one of artist Micah Goguen's workshop on "Depth and Texture". It was her first attempt at painting but she picked up the process easily and ran with it. 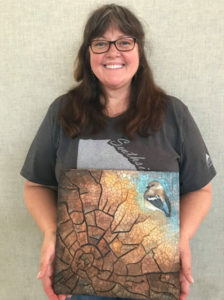 Focusing on a theme of wildlife with the texture, Kris used both Ampersand Primed Smooth and Primed Canvas Texture panels for her work. "I like the Canvas Texture for the crackle paste backgrounds I created. The texture on the panel allowed the paste to have something to grip while drying", says Davenport. Kris entered her first piece "Little Bird Lost" in a public venue showing at a local theatre. "I was so intimidated to show with such talented artists," says Kris. Two different patrons approached the venue to purchase the painting and Kris was able to meet the guest in Atlanta to deliver the painting and also share a bit of her story. We took advantage of the trip to Atlanta and Kris purchased her first oversized Ampersand panel. "She messaged me after the theatre contacted her about the sale and she was crying", Goguen recalls. "She assured me they were happy tears and she was just so flattered that strangers enjoyed her works."

Davenport was excited to hear about Ampersand Floaterframes for their quality panels. She admits that framing the panels can be difficult but the Floaterframes allow the whole painting to be visible without damaging the integrity of the texture.

Suzanne Dunn-Housand has been taking classes with artist Micah Goguen since 2016. She decided after taking a "Depth and Texture" workshop with Micah that she would paint a tribute to a therapy dog raised and trained by her friend. 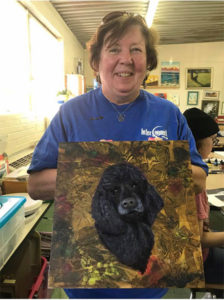 Donny, the Therapy dog, was originally trained and assigned with a woman to alert her about her diabetes but was later reassigned to Suzanne's household when her husband had a stroke. Donny remained with Suzanne's family until her husband passed 6 months later. Suzanne worked with the Primed Smooth surface on this piece and used acrylic inks and a bag method to create the background. She then painted in the portrait of the standard poodle on top.

"I liked using the Primed Smooth for the ink background. It allowed more of the texture to show on the surface. I didn't have any problems with the slick surface when painting because I had already built up the panel with the product", says Dunn-Housand. Micah stated that Suzanne entered the pet portrait in a recent show that helped to raise money for a no-kill shelter in the area. 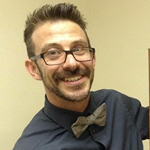 Micah Goguen grew up in Central Georgia and obtained his Bachelors in Art and Art History and his Masters in Art Therapy from Georgia College & State University in Milledgeville. Micah continued studies in figure drawing and painting at Kennesaw University and lived in the Atlanta area for 7 years producing and showing art at local venues. Residing currently in Macon, Ga., Micah focuses primarily on bringing art to the community and using art as a form of communication for those struggling to understand and cope with life situations. To see Micah Goguen's work and to see his workshop schedule, visit his website, Facebook, and Instagram.